Before he was writing for the Dark Knight, Scott Snyder’s first work for DC was back in 2010 with the Vertigo title “American Vampire.” Now the prolific Caped Crusader scribe steps away from the cowl, reunites with former Batman artist Jock, and draws on his horror roots to tell the type of scary story he does so well. 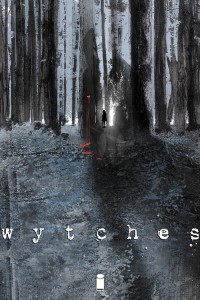 Try to think of the last time witches were scary. The Wizard of Oz? The Blair Witch Project? Unfortunately, for every American Horror Story it seems like there are twice as many Sabrinas, Professor McGonagalls, and… whatever the names were for those gals in Hocus Pocus. Every horror archetype gets rebooted and redone to hell, but where are the ladies? Not to worry, guys – Scott Snyder is bringin’ witches back.

Page one has a definition for the word “witch” – page two has that definition scratched out. “Forget everything you know about witches,” Snyder advises in the lengthy afterword. The sufficiently creepy opening of a mother and son in the woods with hints of Shirley Jackson signal that this isn’t a tale about hags in pointy hats.

Our story focuses on the Rooks family, who have moved into the country after their daughter has experienced a traumatic event. Suffering a mix of anxiety and survivor’s guilt, Sailor Rook (no Tuxedo Mask jokes please) is doing her best to adjust to a new town/house/school. However, there is something in the woods that isn’t exactly welcoming.

I couldn’t help but feel touches of early “American Vampire” collaborator and admitted Snyder influence Stephen King. The small town with an age old evil bubbling beneath the surface, normal family life being disrupted by the paranormal. I almost thought we were in Castle Rock, Maine rather than New Hampshire. That isn’t a knock against the story though. As someone who devoured King in his younger days, I am interested in seeing such an apt pupil twist and update his teacher’s tropes and conventions.

Credit to Jock’s pencils for pulling double duty, showing intimate family scenes and the macabre in great detail. However, I really want to praise Matt Hollingsworth’s use of color. The woods are foreboding without simply being jet black and there is an interesting staining effect used on the scary pages that really highlights the menace. With a laundry list of credits including “Preacher” and “Punisher” I can only assume the next few issues are going to get messy.

Being a first issue, we don’t get very far other than laying the framework, but those pages fly fast and reel you in. The cliffhanger ending cuts so suddenly I actually said “oh come, on!” out loud when I saw “to be continued.” Welp, Scott – you have my attention.

Review 5 (Out of 7) – Creepy little book for Halloween. This is one to follow.