Comic Review: Tarzan On the Planet of the Apes #1 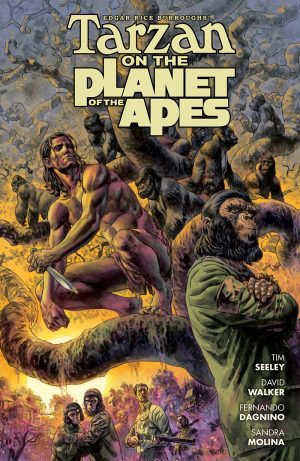 Writers Tim Seeley (Nightwing) and David Walker (Power Man and Iron Fist) team up with artist Fernando Dagnino (Justice League: Generation Lost) and colorist Sandra Molina ( to mash up the classic jungle pulp world of Tarzan with the science fiction of the Planet of the Apes franchise. The story is set in two distinct eras: 2016 where talking apes hunt non-verbal humans much like the classic Planet of the Apes films, and 1901 where humans hunt apes for sport. But there is a twist: Zira and Cornelius from Planet of the Apes are Tarzan’s adoptive parents. This messes with the timeline, and subsequently,

Where Tarzan on the Planet of the Apes #1 succeeds is when Seeley, Walker, and Dagnino seamlessly revel in combining these two classic franchises through interplay between characters, ideas, and even through the action. For example, young Tarzan and Milo spend a page talking trash and arguing, but then team up to escape from a triceratops that has somehow popped up in early 20th century West Africa. They have a genuine friendship, which makes the reveal that they are enemies in 2016 pretty sad even though Seeley and Walker foreshadow Milo’s darker path when he kills one of Clayton’s hunters.

This discovery of the dinosaur leads to a dispute between the more militaristic Kerchak, who killed Tarzan’s parents in the original novel, and the more scientific Zira. (The Mangani apes live in a matriarchal society.) This tension between science and warfare has been a big part of the Planet of Apes franchise with Zira and Cornelius being more interested in getting to know Taylor in the first film than making him a slave like the other humans. They want a 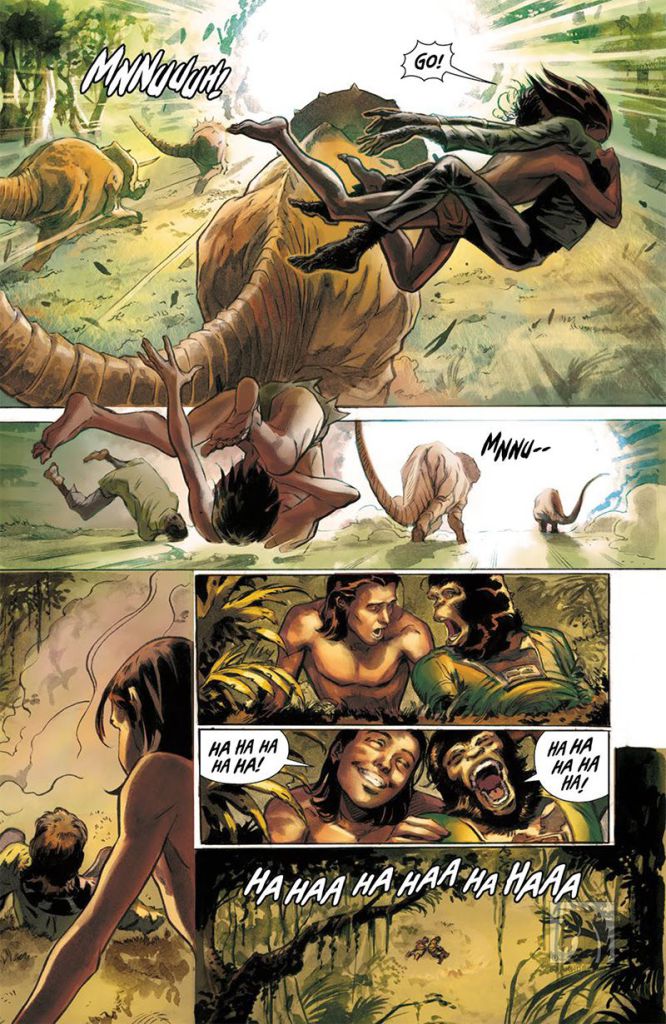 future where different types of apes and humans co-exist in harmony, not the cruel authoritarian world of Planet of the Apes. However, the switching between eras and worlds and constant talk about time travel slows the momentum of the action even though it’s understandable that Seeley and Walker have to have an explanation for the crossover between Planet of the Apes and Tarzan.

Fernando Dagnino’s art in Tarzan On the Planet of the Apes looks like the cover of pulp novels, and he has a nice sense of motion using several small panels to draw out an action scene or a big twist, like when the hunter Clayton captures Kerchak and is surprised he can speak. Sandra Molina’s uses a verdant palette from the 1901 scenes showing the lush, almost peace of the jungle compared to the utter darkness of the dystopia, ape run 2016. Dagnino’s action scenes are violent and rapid fire with Tarzan relying on his agility to take out the hunters (in 1901) and the apes (in 2016) instead of going toe to toe. The only weakness in his artwork is that he makes the Planet of the Apes look to similar regardless of age of gender so it’s hard to see if Cornelius, Zira, or Milo are doing something during the tenser scenes.

Tarzan On the Planet of the Apes #1 has some real flashes of greatness as David Walker, Tim Seeley, Fernando Dagnino, and Sandra Molina began to tell a story of a world that is trying to be a utopia, but ends up becoming a dystopia. The art and colors are pulpy and beautiful, and if the creators can make clear transitions between the different eras, this book could be an even better read.