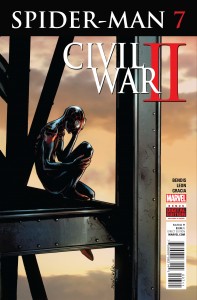 Spider-Man #7 could be retitled “Characters Favored by Brian Michael Bendis Guest Star-Palooza”. The series is a Civil War II tie-in and focuses on Miles Morales’ fears about the impending clash between Iron Man and Captain Marvel’s opposing factions as well as his parents’ fears about Miles’ grandma hiring Jessica Jones to see what his “secret” is. The comic is more of a series of conversations than a plotline as Bendis and artist Nico Leon try to fit the events of Spider-Man with those of Civil War II as a whole.  Also, the timeline of the book is a little wonky, and the comic is set before the death of Bruce Banner in Civil War II #4.

The best part of the comic is when former Ultimate Spider-Man frenemy Bombshell shows up to give Miles Morales some advice during his restless night of the soul. Her energetic power set coaxes some life out of Leon’s art, and Marta Gracia makes her color palette a little darker than your usual Spider-Man comic. And between battling various nameless supervillains, Miles and Bombshell have a nice chat about power and responsibility framed in Bombshell’s more explosive attitude towards crime fighting . (Thankfully those words aren’t used next to each other.) Bombshell is a very reckless superhero, but she does have some good words of wisdom for Miles telling him to not spend his time fighting in Iron Man’s crusade and just focus on fighting crime in his neck of the woods. But Miles actually believes that Ulysses is a threat and could lead to people who weren’t criminals getting arrested and thus wants to fight with Iron Man. The internal conflict is really dialed up in Spider-Man #7 even if the plot of the comic is just Miles Morales trying to get through a sleepless night. 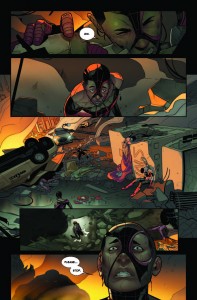 This is “just a dream”. Spidey doesn’t actually fight the Hulk.

Another flash of brilliance that doesn’t connect to the whole of the comic is a short flashback sequence where Miles’ mom, Rio, confronts Jessica Jones and tries to bribe her to stop following around her son. Of course, Jessica sticks to her principles and doesn’t accept the money. The scene reads like a warmup for Bendis’ upcoming Jessica Jones series and even has a nice reference to Alias #1 although Leon doesn’t have the handle on faces or body language like Michael Gaydos and comes across as a tribute artist. It’s nice to get some time with Miles’ parents as they worry about their son, and Jefferson tries to keep his cover as an agent of SHIELD, but the B-plot doesn’t really mesh with the A-plot of Miles Morales worrying about Civil War II.

Spider-Man #7 ends with yet another guest appearance setting up a confrontation between Jessica Jones, Luke Cage, and Miles Morales. As a huge fan of all three of these characters, I personally am looking forward to their interactions. But it seems like it could just be a case of the cliched “fight, then team up” as Luke and Jessica have no real quarrel or connection to Miles beyond Jessica taking his grandma’s money to check up on him.

There’s no real time to do a full Miles Morales storyline with him caught up in the middle of Civil War II so Bendis and Leon are biding their time in Spider-Man #7 with guest appearances and soul searching. Brian Michael Bendis is one of the great comics dialogue writers so the characterization in this issue is interesting, especially with the ideological clash between the chaotic Bombshell and the more orderly Miles, but there’s no real arc just some commentary on the bigger story Bendis is writing. This ends up making Spider-Man #7 an average, not essential read unless you’re a huge fan of Miles and maybe Jessica Jones. (I’m guilty as charged.)