There’s no greater crime you can make in entertainment than presuming that your audience already knows the story. Killer Instinct commits this crime and does it with intent to get locked up! 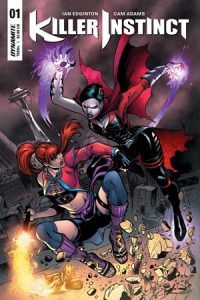 The issue begins after some event that is kind of explained in the middle of the comic, but not entirely. That features characters and reveals that feel like they should be bigger deals, but I have no connections to any of these characters nor this world to really care for any of it in the first issue.

Let’s back up a bit though, Killer Instinct is based off a video game franchise. I will admit that gives the book a bit of a built-in audience. But if we acknowledge that, we must also accept the fact that the last game in the series was released 4 years ago. Yes, there’s been additional content since then, but the last full-fledged release was at the launch of the Xbox One. Thus, even if we accept the built-in audience it would be in your best interest to re-introduce the world and legacy to your new audience.

I’ll acknowledge I haven’t played the game so maybe the plot is this paper thin, but reading the book I couldn’t tell you if it was a sequel to the game or a retelling of the game’s story or focused on an aspect of the world. And ultimately that is a massive failing on the part of the book. I am your audience, and I know very little at the end of my 20 + pages.

Now back to the story at hand. From what I gather there is human settlements, after this war destroyed the world, which is full of families just trying to survive. They are attacked by some random group and one of their members reveals themselves as one of those that caused the problem. She reveals she also has like a spirit of a dragon inside of her nunchuck weapon? She does away with them, but the people in the settlement now fears her so she is ran off. While all of this is happening, another member reveals himself as a spy and relays some info to HQ. Dragon lady is stopped again. Thwarts an attack…

And none of this really impacts me, as you may note didn’t even catch her name or wasn’t invested enough to care for the characters’ names. Part of that is on me, but I shall lay the bulk of the blame on this issue’s narrative structure and pacing. For a first issue it is neither dense enough with information or captivating enough of a story to really sink its teeth into you.