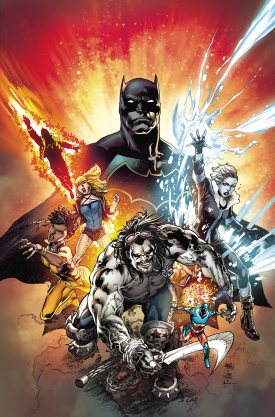 Justice League of America #1 has a blockbuster movie scope as a powerful, high tech armor wearing autocrat named Lord Havok attacks Earth and forces Batman’s new Justice League lineup to come together as team although they’re still getting used to each other. Writer Steve Orlando gives each team member a set of strengths and flaws and begins to set apart his Justice League lineup from previous squads. Where he was the snarky loner or plain asshole in Grant Morrison, Geoff Johns, or the DC Animated Universe’s takes on the League, Batman is this team’s ideological center and carries the team on his back even though he doesn’t’ t have powers. But, like Vixen remarks early, they are truly a powder keg, and it will be entertaining to see Batman forge them into a coherent

Ivan Reis was born to draw a book like JLA, and his inkers Joe Prado, Oclair Albert, and Julio Ferreira keep his figures clean and powerful and still emote on a human level, like Ryan Choi’s Atom freaking out about being in battle for the first time. Orlando chooses to open the comic with a cold open/montage of the JLA working together in pairs giving Reis a chance to draw the team in different environments as well as for Marcelo Maiolo to set up distinct colors from each team member from Batman’s black to The Ray’s gold and the pallor of Killer Frost. Then, in the last third of the book, Reis gets to go ape with double page spreads of the team struggling against Lord Havok and his invaders. His spreads aren’t just glorified pinups, but are active and showcase the team’s unique abilities, like Lobo’s powerful punches or The Ray’s light powers, and also the pretty heavy firepower of their enemies. 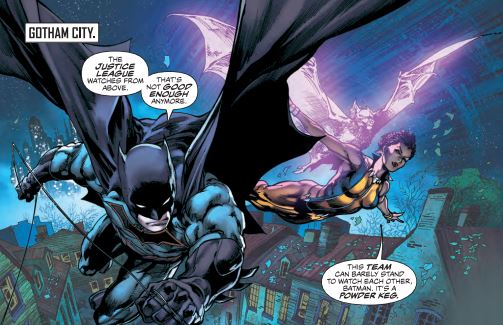 Instead of being seven gods fighting cosmic forces or creating pointless drama from superheroes behaving  out of character, Steve Orlando crafts his dysfunctional superhero team from his characters’ personalities that have been established in JLA Rebirth and the various Rebirth one-shots. Batman and Vixen are definitely in charge, but Vixen is more cynical about this team lineup whereas Batman has a soft spot for “bad guys” like Killer Frost and Lobo, who helped save his bacon in Justice League vs. Suicide Squad. With her need to feed off life force, Frost is definitely the biggest wild card on the team and saying dark things like Lobo’s body could sustain her and survive her won’t help her.

Along with moral and team dynamic conflicts, there are conflicts between experience and inexperience in JLA #1 between The Ray and The Atom and everyone else. At least, Ray has Batman in his corner and some experience as a search and rescue type superhero even if he’s a bit away from executing complex team maneuvers. However, the Atom is big time underwater and only on the squad because he has a high tech suit, and Lobo wanted to give him a shot. And thus, he ends up becoming the team’s weak spot whiffing on size changing, tech disrupting maneuver that Ray Palmer could do in his sleep. Ryan Choi has a bright attitude and a brilliant time, but maybe he’s not cut out for the high stress life of being a Justice League member. Except that he is the spitting image of the “ordinary human” that Batman hopes to inspire in his creation of the team.

On the surface, JLA #1 is about a new superhero team with heroes of varying skill sets, moral compasses, and fighting autocratic alien invaders, who want to save Earth from itself. (Their speeches sound like Donald Trump’s  protect America from people who don’t look like straight white Christian males, but with more edged weapons and Power Ranger bad guy armor instead of a toupee and bad spray tan.) But it’s a battle between idea and execution as Steve Orlando has Batman talk about creating a team that can inspire regular people to be heroes, but Ivan Reis and company show them stumbling over themselves. Hopefully, Batman’s badass speeches and fearless fighting moves can get them back on track.