Comic Review: Jem and the Misfits #1 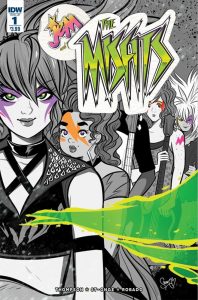 Part origin story, part new direction, Jem and the Misfits #1 doesn’t suffer from any spinoff blues as writer Kelly Thompson, artist Jenn St-Onge, and colorist M. Victoria Robado tell the story of how they became a band and also their current attempts at relevance. The shenanigans that the Misfits have constantly been up to in Jem and the Holograms finally come back to bite them, and they have to “sell out” and have a reality TV show after their label drops them. This will give them an opportunity to indulge their “bad sides”, but it is kind of a death blow creatively. I mean have Brett Michaels, Flavor Flav, and Vince Neil have made any artistically relevant music in the past decade. (I was going to add Ozzy Osborne to this list, but the Black Sabbath reunion kicked ass.)

The comic is titled Misfits, but Thompson and St.-Onge really make the book all about Pizzazz, which makes sense because her extreme competitiveness, outsized personality, and sheer attitude. She also really loves making pop music, and her compliments about Roxy, Jetta, and Stormer’s talent come off as genuine because she doesn’t hand them out that often. In their own dysfunctional, beach volleyball playing, fist fighting way, The Misfits are Pizzazz’s real family, and she is willing to do anything possible to keep them together.

Jenn St-Onge’s art for Jem and Misfits #1 adheres closely to Sophie Campbell’s fabulous character designs in the original Jem, but she brings her own fashionable  flourishes to the series. For example, she draws the Misfits kind of like chibis when they are playing beach volleyball, which adds an extra adorable factor as well as making their anger at each other that much more hilarious. Her and colorist Robado’s hellfire and skulls combo gives each knee jerk anger sequence a little extra heft and shows that the Misfits show their “affections” for each other in very different ways than their rival bands. And as a cherry on top, St-Onge designs some outrageous outfits for the Misfits, including Pizzazz’s leopard print robe that stands in stark contrast to the faded look (and color palette) of her emo outfit as a teenager. She is truly living her rock star dream.

Kelly Thompson skillfully weaves past and present in Jem and the Misfits #1 establishing their group dynamic through squabbles (And secret hugs between Clash and Pizzazz, who share a warm bond.) and fights. Jenn St.-Onge and M. Victoria Robado bring  an over the top rock star flair in the art and colors to in a spinoff comic that is more Angel than Joey. (Even though it has absolutely nothing in common with those TV shows.)