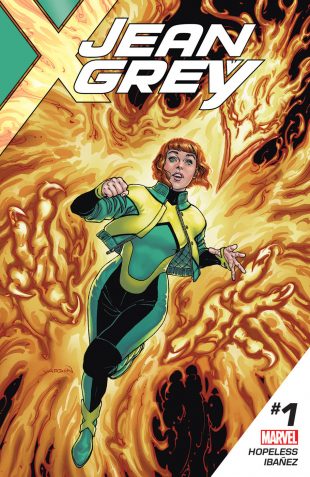 Young, time displaced from the 1960s Jean Grey has a lot of issues. She got her telepathy early and also has to deal with the fact that the dead adult version of her ended up becoming Dark Phoenix (or whatever it was retconned to), destroying a whole planet, dying, resurrecting, falling a love, and basically experiencing decades of X-Men drama. This provides some ample fodder for some internal struggles, which is the high point of Jean Grey #1 from Dennis Hopeless (All-New X-Men, Spider-Woman), Victor Ibanez (Storm), and Jay David Ramos (Action Comics). However, the team fails to craft a strong argument of why Jean should have her own series, and this issue feels like the start of a Phoenix-centric arc of X-Men Blue, especially with the boys coming to bail her out at the end.

Even if lack a strong hook beyond “return of the Phoenix”, Hopeless, Ibanez, and Ramos crush it for the most part in the character and visuals departments. They use a way too long superhero battle between Jean (Her ramen eating Bamf buddy Pickles stays out of the fray.) and the Wrecking Crew in Kyoto to showcase her great power, her fear of hurting other people, and the fact that she’s young, not used to doing telepathy and telekinesis at once, and used to having the X-Men for backup. Through intense close-ups rather than your typical superhero splashes, Ibanez digs into Jean’s fear, surprise, and strength. She knows she’s outmatched by the Wrecking Crew, yet continues to fight them at close quarters with her telekinesis. However, Ibanez is always cutting around to her surroundings as her ability to hear people’s thoughts makes Jean very wary of collateral damage, and checking to see if human beings around her in okay leaves her vulnerable.

Unfortunately, Jean Grey #1 leaves itself to open to “Why does this book exist?”, which flows out of the question, 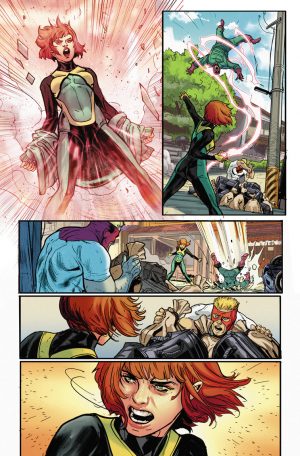 “Can there be a great Jean story that doesn’t involve the Phoenix?” Opening with her frank thoughts about her future self and spending a lot of time when four, smelly teenage boys over noodles is a good start, but the post-supervillain brawl back half of the comic firmly establishes Jean Grey in the “This book will be about the Phoenix force” camp. At least, Jay David Ramos is there to make the Phoenix powers look cool with a bright orange watercolor palette that flows into Jean’s red hair and is the fiery alternative to the cool whites of her telekinesis, or the pink of her telepathy when Jean fails at using visions of flowers and unicorns to calm down a young Japanese girl.

Jean Grey #1 works on a pure character study level, and it looks that everyone’s favorite ginger Omega Level mutant is on her way to having a robust arc similar to Dennis Hopeless’ work with Jessica Drew in the recently cancelled Spider-Woman. We get to know what Jean is thinking almost at all times, and why and how she acts in certain ways. She definitely wants to make her own mark as a mutant and superhero and not be a cover version of the older, dead Jean Grey, especially where the Phoenix Force is concerned. Refreshingly, Hopeless doesn’t even hint at her having a love interest focusing on her hopes, fears, and relaxation. (For like three panels.)Victor Ibanez gets major points for creativity through his fight choreography of making Jean a powerful, yet very uncoordinated superhero with a nice conscience. For every speed line filled panel of Jean chucking a car at Thunderball, there’s another one of her getting distracted by the bystanders around her or getting decked by another Wrecking Crew member.

Just like the Phoenix Force itself and its potential for life or destruction, Jean Grey has potential to probe deep into the psyche of one of Marvel’s most enduring, yet underappreciated characters with some fun superhero bits and guest appearances. Or it could be a retread of the various past stories featuring the flame bird. At least, the Phoenix will look gorgeous thanks to the warm, powerful art of Victor Ibanez and Jay David Ramos.

Overall Rating: 5 (out of 7)- Jean Grey #1 offers keen insights into the mind and motivations of one of the Marvel Universe’s most powerful mutants, has some creative action from Victor Ibanez that nails how a predominantly team hero would fight solo, but doesn’t really set itself apart from the previous Phoenix “sagas”. (Or Saga)