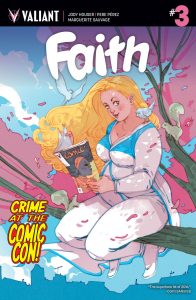 It was kind of a give-in that the ultimate fangirl turned superhero, Faith, was going to hit up a convention. And in Faith #3, she and her boyfriend Archer go to West Coast Fan Con with Faith cleverly hiding in plain sight and cosplaying as herself while Archer pulls off Legolas very nicely. Jody Houser’s plot isn’t super high stakes, but it’s nice that she slows down a little bit and develops the relationship between Faith and Archer while also looking into the good and bad sides of cons. Plus the final page is kind of unexpected and adds a bit of mystical touch to the two superheroes attending a comic convention storyline with colorist Andrew Dalhouse switching from a realistic, yet colorful palette to denote the con setting to a trippy emerald color scheme.

The highlight of Faith #3 was a double page “fantasy” spread from Marguerite Sauvage showing how much cons mean to Faith in a flashback to her past where she dressed up in a copyright friendly Starfleet uniform, took pictures with a couple Klingon cosplayers, and met Nichelle Nichols. It’s one of Faith’s happiest moments and captures that amazing feeling of walking around a con where people recognize the indie comics reference on your T-shirt, you can build friendships by waiting in line four hours for an Alex Ross signings, and meet your heroes. And even though a guy in a cartoon mouse mask stealing from vendors seems insignificant to alien invasions or possible apocalypses, it means enough to Faith that she and Archer are ready to find the culprit and bring him to justice.

The way that Faith, Archer, and @X, their hacker buddy, search for the criminal is pretty clever and realistic as they 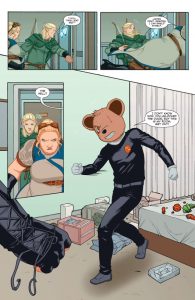 scrub various Instagram accounts to find a guy in a mouse mask. (X also lets his geek flag fly by agreeing to help Faith and Archer if they get him a full set of figures from his favorite sci-fi show in a humanizing moment for a guy who hides behind a computer screen/word balloon.) Pere Perez’s art nails the hustle and bustle of the convention with crowds everywhere, and he populates his panels with distinctive cosplayers, booths, and even cameos from actual comics creators on the credits page. Plus the “Con Tips” that Houser are funny, helpful, and in-line with Faith’s positive attitude about geek culture as she tries to help Archer loosen up and enjoy himself at con even catching him taking selfies with fellow fantasy cosplayers.

Faith #3 continues to explore Jody Houser’s theme of using fandom as a way to cope with the messed up world around us as Faith and Archer decide to have some fun and go to a con after their first big relationship fight during the business with Chris Chriswell. Except in a world where Gamergate exists, women get death threats for enjoying the reboot of Ghostbusters or acting in it, and there is just plain racism any time a person of color gets cast as a character that was originally white,  geek culture can be toxic. Houser and Perez show this in a slightly creepy and hilarious way through the cartoon mouse cosplaying and reality bending supervillain in Faith #3.

Finally, Archer should always dress up like Legolas. He pulls it off better than Orlando Bloom.