It is inevitable with a weekly series that you will need to do a palette cleansing episode. After 25 issues and half a year, it was time to give readers a chance to catch up, and that’s what Batman Eternal #26 offers. 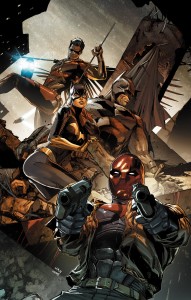 That isn’t to say that this issue is presented as a recap one, but it does a pretty job of serving that purpose. Very little forward story-momentum is established in this book. Instead, we get Bruce catching up the Bat-family on everything they missed on their various separate adventures. Introducing them to Alfred’s daughter and confessing that Hush is the big bad of the weekly.

Batman also finds the perfect chance to recap Hush’s origins as Bruce’s childhood friend, who became a little too obsessed with being like a younger Bruce Wayne that he even corrupted himself to become a foe to Batman as an adult.

Then there’s Spoiler who semi-recaps spying on her dad and his friends before having the tide turned on her.

All in all, there’s not much of a NEW story in this issue, but it does serve as doing a decent enough job getting everyone on the same page for the back-end of the series.

The art in this book was solid. Some cool page layouts including the declaration of martial law in Gotham, and the Hush flashback, which had some great coloring. Real highlight of the issue.

Review 4 (out of 7) – If you haven’t been reading this series, the perfect issue to kind of jump in with for the end-game. If you have been reading, this doesn’t introduce much in the way of new material.