Outrageous isn’t the word I’d use to describe Aquaman: Rebirth #1. Aquaman, of all the major DC characters, is the one DC has tried its hard 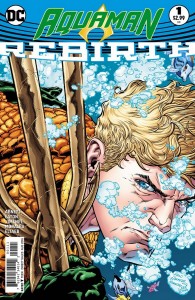 est to rehabilitate and it makes a bit of sense considering he’s known in most circles as the fish dude. The formula the company has seemingly decided on is to have them to initially have Aquaman be the butt of the jokes only then to show how awesome he is afterward.  This isn’t Writer Dan Abnett’s first foray into Aquaman and the way your thrown into the deep end shows it.

The story is a pretty straight forward to the introduction of Aquaman, though it does feel like a rehash of Geoff John’s Aquaman #1 from 2011.  We see Aquaman through the eyes of the world which can be a King, Joke, and superhero depending on who that is. The world and the narrator of the book sees Aquaman as Monolith of sorts. The final 4 pages us that Arthur Curry is just a man of two cultures trying to get them to meet in the middle.

The one shot works well as an introduction of a new reader interested in Aquaman, though if you’ve read the past few our issues of the last Aquaman series you get a better look into the side characters. In interviews Abnett has said he’s looking to focus more on political elements of Atlantis. It shows in this book as the Villain isn’t some upstart super villains but Alanteon dissenters unhappy with their Kings rule. We also see that just like in real life AC and company have to deal with bad public relations and being seen Aliens on their own planet.
The art by the team of Scot eaton and Oscar Jimnez is serviceable if not a bit disjointed with the mashing of two different styles. Both the Cartoony and somewhat photo realstic styles work for the characters and mashing them together to book end the one-shot actually works. Overall this was a good introduction to the King of the Sea and a great interlude for what I see as the season 2 of Dan Abnett’s Aquaman story.