The holidays might seem like a strange time for Alien carnage but I remember seeing Aliens vs Predator: Requiem in a nearly empty theater 7 years ago on Christmas (Christ, I’m old). The positioning of the Fire and Stone series around this season might even correlate with the quasi-religious “Jesus was an Engineer or something” message of Prometheus. What’s Fire and Stone, you ask? Dark Horse has given each of their extraterrestrial Fox franchises (Aliens, Predator, AVP, and Pro 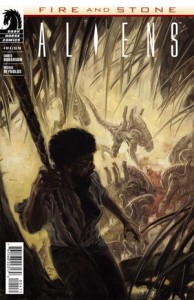 metheus) a 4-issue story, interconnecting them under the Fire and Stone banner.

This particular title spins directly off of James Cameron’s Aliens, following a group of Hadley’s Hope colonists who fled their Xenomorph infestation to land on LV-223, finding a lush jungle and some unwanted stowaways. After last issue’s unfortunate black goo mutation led to an Alien swarm attack, terraforming engineer Derrick Russell is the last human survivor. Despite his hellish plight, he seems more focused on analyzing the black goo than anything else. I haven’t decided if his investigation is due to his science background or if it is his coping mechanism for the living nightmare around him. Withdrawing even before losing his comrades, Russell now spends his days talking to an old Weyland rover and desperately scrawling notes all over his cave hideout.

Maybe it’s my inclination towards horror, but these Aliens entries have been my favorite in Fire and Stone. It uses a familiar “marooned” scenario to make some interesting points about the black goo and this last issue plays out like Cast Away… if Tom Hanks was chased by Xenomorphs. Unfortunately, as this was chronologically first in the crossover and other books have already hinted at the fates of the Hadley’s Hope refugees, it has robbed this finale of an element of surprise. With that in mind, thankfully the work was done well.

There was a lot of talent pulled into this book and it shows. iZombie scribe Chris Roberson keeps Russell’s goo obsession analytical as he unravels. Dark Horse mainstay Patric Reynold uses a realistically sketched style that makes for some creepy panels. Russell’s expressions of anxiety and anguish elevate the tension, making the Xenomorphs look that much more terrifying. Eisner award winner Dave Stewart’s color palette manages to be dark but not drab. And a shout out to David Palumbo’s cover art, which has been a great primer for the horror in each issue.

Since its release, I’ve considered Prometheus to be the Poochie of the AVP universe. I was wary of it joining the rest of the Fox monsters on the Dark Horse roster. Thankfully, much like the comics before it, writers and artists can come up with fresh takes those in Hollywood can’t or won’t do.

Review 5 (out of 7) – Creepy Xenomorph tale artfully done, but I wish this team could have been used on a book that didn’t have a pre-defined outcome.