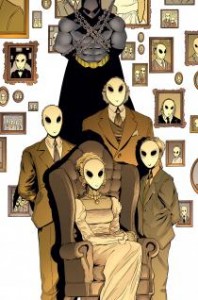 Many of the villain month titles have been stories many readers are familiar with, stories about characters we know. The Court of Owls are not even two years old, so there is still much not know about this “villain”. They have done stuff that not many villains have been able to do, mess with Batman. This issue digs deep into their history and allows the reader to learn more about their long history.

The issue has many flashbacks, all going to different years. This can be quite confusing at times, since there are about three or four different time periods that are being presented. The art worked really well in this issue, there were slight changes in the art for each of the time periods. This helped the transition between time while throwing in a different vibe for each era.

Overall, the reader is allowed to learn more about this still mysterious group. They were part of a great Batman story and should be allowed into the Batman Universe. This is building more foundation for them, while making them all the more interesting. The ending of the book is going to make readers want to start reading Talon to find out what is going to happen. 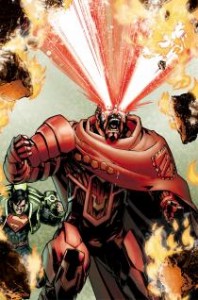 After Man of Steel, I am sure many people will pick this up to see the “origin” of General Zod. The issue gave us an origin of Zod, which made for an entertaining one shot issue. The beginning of the issue deals with monsters and how Zod has always been fascinated with them since he was a little boy. This seemed like an odd way to to begin the issue because as a reader I wasn’t sure where it was headed. Upon reaching the end of the issue everything was wrapped up in a nice bow and came together.

The art in the issue was lacking, with the whole issue on Krypton it would have been nice to see some more detail and vibrant colors. Even with the lacking art the story overall made up for it. The reader is allowed to see the tragic life of Zod and how he becomes the villain of Superman.

Overall, the reader is allowed to see the world as Zod would have wanted you to see it. The issue ended on a perfect note with him being put into the Phantom Zone and Zod vowing his revenge. The way the monsters were all tied into the story was a great revel as well as the destruction of Krypton. 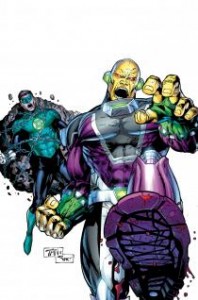 Villains Month has been very hit and miss with the issues. Some have been tying to current stories in the main title, others have been one shots, and some have loosely tied to Forever Evil. The Mongul issue appears to be a one shot, but could foreshadow a battle against the Green Lanterns in the future.

Green Lantern art needs to pop and be colorful, this is a title that has a color spectrum after all, and that is something that seemed to be missing in this issue. With this issue the art doesn’t seem fit for a Green Lantern issue. The reader gets to see just how much of a dictator Mongul really is and how he will do anything to rule the universe.

Overall, the Mongul issue was interesting but seemed to lack what really makes him a threat. The issue took place on Warworld but we weren’t given any interesting battles and his backstory wasn’t as interesting and as action packed as should be.