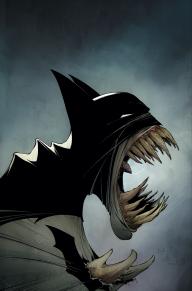 WARNING: The following reviews are full of SPOILERS!

Batman is surrounded by the GCPD and is having a difficult time escaping, when suddenly at his most desperate moment he gets help from someone he doesn’t yet trust. Jim Gordon pulls batman out of the water and begins telling him that he is good for Gotham and also wants to save the city just like Bruce Wayne does. Gordon tells Batman how a young Bruce Wayne made him realize that he needs to be a good cop, and also tells him how he came upon Bruce moments after his parents were shot. Later in the Batcave, Alfred tells Bruce that he needs to trust people and allow himself allies if he ever wants Batman to be successful. The issue ends with the Riddler making his final move.

With Zero Year being a Batman “Origin” story its interesting seeing so many areas of him never explored before. The way Alfred and Gordon always seem to be there and trusted are allies to Batman allow him to be a true hero. Without them he is someone who in a tough situation might not make it out alive. This issue really explored that relationship and dug into what really makes Batman a real hero. Capullo’s art is fantastic as always, but it really the colors that continue to shine in this Zero Year story.

Overall, Batman #27 was the perfect calm before the storm. It answered some questions and really allowed several characters to grow into the heroes they truly are. The hard part will be waiting two months for the finale to Zero Year. 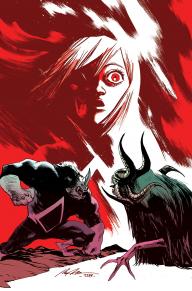 Buddy is tapping into the powers of animals across the universe as he faces off against Brother Blood. While Buddy is battling Blood, Maxine is off trying to hide on the edge of the Red where none have traveled before so that Blood does not destroy her. The soldiers of the Red are trying to defend Maxine from the beasts of Brother Blood. When they arrive the battle begins and they have the upper hand. Maxine gets turned around and ends up walking into the middle of the battle just as the shepherd gets killed.

Buddy was able to tap into the beasts of the universe which allowed the fight between him and Blood to be more fair. Lemire did a great job with the dialogue between the two and having buddy say that he has more to live for then the villains he fights because he has a family. The battle between the beasts and the protectors of the Red was very emotional especially when Shepherd dies. The art is dark and really gritty which is perfect for the battle going on in the Red.

Overall, Animal Man is coming to an end, and this was a great set up to that conclusion. The bits with Buddy’s wife was interesting, and the part at the end was very emotional. The battle between Buddy and Blood is going to be big, and so far it left a lot to be desired. There didn’t seem to be enough with them both battling. Hopefully Animal Man goes out on top next month. 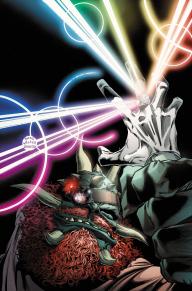 When a war breaks out between between the Kalimawans, a beast like creature, and the Muscarians, a mushroom creature, only the White Lantern can come save the day. Exeter was the keeper on the edge of the universe and when he left his people were very peaceful and would never attack the Muscarians. When he returned to war he called Kyle to help stop the ongoing battle and determine what caused it. The battle wages on and Kyle, Carol, and the “Guardians” help determine that a skin changer acted as a Kalimawan and changed their memories to create the war.

This was a standalone story that really just showed Kyle off saving another planet in the universe from war. It seems that lately New Guardians is reusing the same story month over month. Kyle seems to be a very important character as the White Lantern in the Green Lantern Universe and seeing him not being used to his full potential is a bit frustrating.

Overall, Green Lantern New Guardians #27 needs to move away from the “Freak of the Month” it has been doing lately. With such beautiful art it can be tough to see it hurt with a mediocre story. New guardians needs to find a path for Kyle that will allow him to live up to the potential he has.