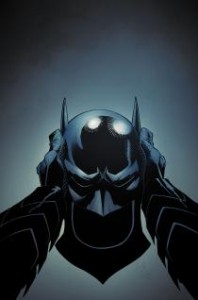 It feels like forever since a Zero Year story, and this month readers are giving an extra sized Batman treat. Many people may get turned off by how wordy Snyder can be at times, but this oversized issue really moved the Zero Year story forward and allowed readers to witness iconic moment after iconic moment.

The art continued to impress and there are so many excellent pages it is hard to decide which iconic page was the best in this issue. This time period is very exciting for any Batman fan. Seeing him “suit up”, the beginnings of the bat cave, and Gotham prior to Batman, makes for one action packed fantastic issue. Seeing what could be to conclusion to the Red hood gang was exciting, as was the shocking ending.

Overall, Batman 24 is the best issue of Batman in the New 52. There are so many iconic moments and character driven dialogue that this will be remembered for a long time. The ending conversation between Bruce and Alfred was very fitting for this moment in the story. Alfred is probably one of the most important characters in the Batman universe and this issue really shows the reader why. Chapter one of Zero year is now over, but it was rewarding. 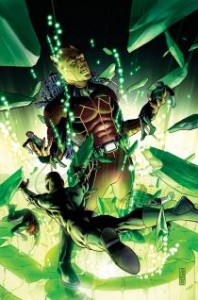 Part two of the lights out story line continues right where Green lantern #24 left off. This has been a great story so far and it is going to change everything readers know about the Green Lantern Universe. This issue is where the change begins, and in a big way.

The ending of this book was hard to accept. What happened will have a profound effect on the Corps and will make it very hard for them to go toe to toe with Relic going forward. The art in this issue was a bit underwhelming at times, which the constructs look great the characters lack some detail as well as the environments. The story however keeps the reader on the edge of their seats. The corps focuses more on John and we get to see him use his military background to save countless lives this week. Lately he has been down and it was refreshing seeing him take charge and really do whatever he could to “save” the day.

Overall, the issue keeps the story intense and the battle against Relic a real threat. Seeing John continue to have a central role in this book is a great change of pace. The art did not have the pop that is expected from Green Lantern books, but the final pages will make every Green Lantern fan gasp. 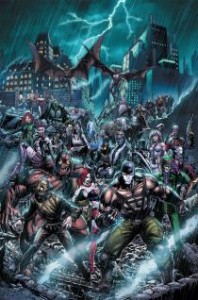 This is a story that continues from some of the villain month titles, but there is a nice refresher at the start of the book to bring new readers up to speed about the battle between Bane and Scarecrow/other Batman villains. This has the potential to be a very cool and interesting story, how this will shake out remains to be seen.

Seeing Gotham overrun with villains and Batman “dead” is hell on earth, and this book did a good way of showing just how horrible that city has become in Batman’s absence. There is a lot of art and colors that really don’t seem to work in this issue and can make it a bit confusing because many pages seem very “busy”. Also there are a few pages when Bane wants to take over other territories for other villains that seem to be just brushed over very quickly. It would have been nice to allow the reader to see a half a page or so with those fights.

Overall, this has an interesting story that will excite a lot of Batman fans. The only problem is that with it being the first issue there isn’t much to go on and how the story will pan out over the six issues. It is possible this issue could improve over time as the story goes on, and will read better in trade.