Green Lantern Annual #2 brings the Lights Out story line to a close. The issue begins with the Green and Red Lanterns confronting Relic after Hal tells Guy that John is dead. Hal also learns that Carol loves Kyle and that is how they are able to find Relic because Kyle is still near there trying to save the universe. When they arrive the rings are low and they try using the Red Lanterns to stop Relic, when Guy’s Red Light is used against him by Relic, John returns to save Guy with the Indigo Tribe. The Corps make one last attempt to push Relic into the wall at the edge of the universe which will trap anyone who comes in contract with it. Relic believes the source for the light is beyond the wall. They push him toward the wall as Guy and Hal back off, but Kyle pulls Relic into the wall, Kyle gains more power the more he helps save life, having 100% as he and Relic enter the wall and replenish the Source of the emotional spectrum. The Green Lantern Corps return to their new “home” planet Mogo where the Indigo Tribe has repaired the central battery.

This story up until now seemed to really put the Green Lanterns though hell, they lost a lot and really have had a ton going on since the New 52. They lost the central battery and their home planet. This ending really did not fit the epic feel that Lights Out. With this being a larger issue it would have been nice for some more battle scenes with some cool constructs, also what happened to the Blue Lanterns. Everything seems to just wrap up nicely in a bow without any major consequences.

Overall, Lights Out was a great story; the end could have been a bit better. The Kyle story going forward will be very interesting. The art was beautiful again, as it usually is with any Green Lantern book. The interesting end with Hal having a question mark after reciting the oath could really hurt the Green Lantern Corps if their leader does fully believe. 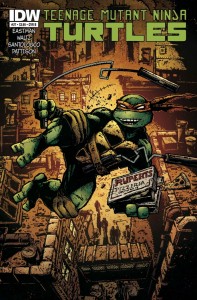 City Fall continues in TMNT #27. Shredder is calling all the criminal organizations together for a meeting to show New York how powerful he is. Leo is still having dreams about his mother and his brothers, while betraying Master Shredder. The other turtles have bonded well in their efforts to find Leo. Mikey has been going under cover as a pizza delivery guy when he hears news of this meeting. When he tells the others they decide the time has come to get their bother back. They attack Shredder at his meeting and a battle starts. Along the way they get to Leo and try to escape when the only way out is blocked.

City Fall has really been an impressive story and one that has taken Shredder and to foot to a whole new level. Leo as a “dark” ninja has been an awesome twist on the story and really shakes up the normal dynamic of the group. The art continues to impress and really is done well in the action scenes in this issue. The favors the turtles are calling in for help to get Leo back will make for interesting stories going forward.

Overall, TMNT #27 is the beginning of the end to City Fall. Where everything shakes out in the end remains to be seen. Hopefully next issue there is a battle be Shredder and Splinter. The story has been at such a high level hopefully the conclusion lives up to the story so far.

Swamp Thing Annual #2 continues the seeder story where it was determined that Alec must fight the seeder to determine who the true avatar of the green will be going forward. Each is given time to prepare for the coming battle. This issue starts off with the history of the Green and how it had to create an avatar to keep balance when other life forms arose. Next, they had to create the Parliament of Trees made up of past avatars to help guide the new intelligent life forms making up the avatar. We now see Alec is being told this story from a Parliament member and has to go meet Lady Weed to train, she suggests that he needs to let go of his human side and that will allow him full access to the Green where he can be in several places at once. Alec doesn’t want to give up the only part of a human he has left. After he is sent to meet the avatar before him, one that every avatar strives to be, this avatar was made and not chosen. This avatar tells Alec to not do the things asked of him if it will change who he truly is on the inside. Alec accepts this advice.

The way the story starts with the history of the Green was very interesting plus seeing the different avatars, including a dinosaur was exciting. The art really made a lot of the story really fun, including how each avatar looks. The whole Lady Weed made for a fun character that would be interesting to have pop up more often in the story considering she went through what Alec is going through now. While her methods might be totally different then Alec’s he could probably learn a lot more from her.

Overall, Swamp Thing Annual #2 really helped establish the story and really dug into the history of this world. It has some excellent art and the anticipation for these two to fight is really building. It will be interesting to see what Alec will do in order to remain the Swamp Thing.