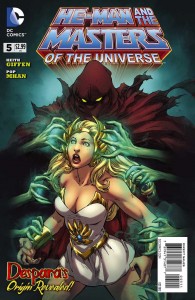 He-man and the Masters of the Universe #5

Once Upon A Time

Hordak’s deception comes crashing down; Adora discovers the truth of her relationship to He-man. Breaking from the siege of Grayskull, the story drops the action to focus on telling how Adora became Despara. Meanwhile, He-man puts his new armor to the test. Keith Giffen and Pop Mhan continue to reinvigorate the story of He-man and the Masters of the Universe through fun storytelling and glorious art.

I’ll admit, I was a He-man fan as a child but haven’t read or watched much about the series until recently. When the trade for last year’s re-imagined series finally hit the shelf, I snatched it up and couldn’t put it down. I had forgotten how much fun the world of Eternia was. He-man may have started out as an action figure, but the character have evolved into a wonderful property that still fills me (and probably other readers) with childhood excitement. So far, the hardest aspect to swallow has been Adora’s presentation. I remember her as the long-haired, beautiful heroin from the 80s. In this series, she’s got short hair, a temper and nasty scar across her face. I don’t know how this will shake out when/if she becomes She-Ra, but it’s certainly been an interesting take. Though, at this point her personality is very similar to Teela’s so I hope Giffen can further distinguish the two.

This new on-going series was a slow start for me but it has quickly picked up pace. Giffen has been doing a wonderful job writing these characters, especially He-Man and Despara. There’s plenty of humor though at times it can feel like the banter is a bit overdone. Still, at least the jokes are funny. Even though this issue was dialogue heavy, Giffen has also been doing a great job keeping it focused on the action. Mhan translates scenes into exciting panels that instill the same feeling as the original cartoon. He-Man’s new armor even looks great!

This is one of those series that will probably fly under the radar for many comic readers and it’s a shame. He-Man and She-Ra are amazing properties that feel right at home in DC’s New 52. This book is even being followed by a special mini-series: DC Universe Vs. The Masters of the Universe! It kicks off next week and if you’re enjoying this series as much as me, you’ll likely be picking it up. If not, I would definitely recommend hopping on board because this looks like it’ll be quite an exciting crossover! 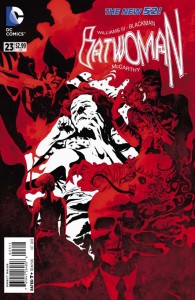 This Blood is Thick: Veins

Batwoman and Bette prepare for their battles against Batman and the D.E.O. In the final hours before rushing off to take on Batman, Kate settles personal matters with Maggie. Bette kidnaps a man who can point them to where Elizabeth Kane is being held captive. J.H. Williams, III and W. Haden Blackman deliver another chapter in Batwoman’s quest to free herself from the D.E.O. that falls flat on the action.

Kate has been feeling bad about drugging Maggie with the Scarecrow’s fear toxin. So she shows Maggie how much she cares about her by drugging herself with the same. She spends twelve hours in the same nightmare that Maggie previously endured. After promising to never cheat, murder or hurt Maggie’s daughter, all is forgiven and the two become engaged. On her own quest to free Elizabeth, Bette kidnaps someone from the D.E.O. and uses his own personal ambitions against him.

This was a tough read for me because I didn’t particularly enjoy the story or art. This book used to be exciting and gorgeous but it has been on a slow decline. I am trying my best to stay open minded because I really like the characters. The story arc has even been interesting because I’ve been anxious to see a battle between Batwoman and Batman. However, this issue was just pushing plot points forward and setting the story up for the next issue.

Despite my lack of interest in this book I am still optimistic for the remaining issues in this arc. Bette may have been training hard to infiltrate the D.E.O. to rescue Elizabeth, but I expect that to go wrong. There will be repercussions for Batwoman and that will be interesting to see.