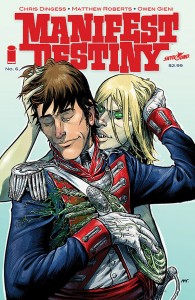 Supernatural plant zombies engaged in an all-out battle with the Lewis and Clark expedition. This book brings a gruesome end to the expedition’s brief stay at La Charette. The plant behind the infection that turns animals and humans into zombies is revealed but not before nearly satiating itself with a couple of the explorers. For a period piece of a story, this book had some wonderful moments throughout that made it a book I couldn’t put down.

One of the many titles I picked up at Emerald City Comic Con, Manifest Destiny by Chris Dingess has yet to disappoint. It’s got so many great things going for it: it’s a period piece with mystery, violence and supernatural monsters. As most of us know from basic American history lessons, Lewis and Clark led an expedition to explore the United States to the Northwest region; cataloging the flora and fauna. In Manifest Destiny, they had a secret mission concerned with the supernatural elements of the land. The monsters they encounter are the big twist. This story almost reads like a Buffy the Vampire Slayer episode. The first encounter with “minotaurs” shocked me but certainly pulled me right into the story. While not as gruesome as these monsters, the plant zombies certainly caused a lot of trouble for the expedition. After being chased into an abandoned fort, La Charette, they find out what happened to the men previously stationed there. A fight with the zombies ensues after they attempt to flee back to their boats.

Zombies are still a hot thing in comics but I loved the twist of making them caused by plants instead of a virus. For one, it made them a bit easier to kill since they could be lit on fire. They were still very deadly! Dozens of animals from the surrounding forest were turned and were just as dangerous as the hordes of zombies in The Walking Dead. The encounter with the “mother plant” that controlled the zombies was a wonderful scene because of how it attempted to devour two of the men. Much like a carnivorous plant it was going to slowly digest them after putting them asleep. Gross, but the dreams were suppose to be pleasant to keep the men asleep and it was very interesting as to what each dreamed about. Quite a bit of mayhem occurs in this book but it had a satisfying ending. The expedition continues forward albeit with some surprises (leftovers from the battle) and fewer members.

Amidst the supernatural elements in this story, keeping it grounded in the 1800s is the artwork by Matthew Roberts and colors by Owen Gieni. Roberts illustrates everything quite well. Animals, boats, rivers, mountains and forests all look splendid. Even more so, his ability to work a scene by using detail to focus a reader’s attention on the most important moments adds to the splendor. In particular, backgrounds have a suprising amount of detail when the story calls for wide shots and get more simplistic as the action increases. When the monsters and many other supernatural elements appear in the story, Roberts does an amazing job making them look terrifying. Complimenting these horrific and beautiful scenes throughout the book are the gorgeous colors by Gieni. His choice of color palette suits the period exceptionally well; giving the entire world an untamed, natural appearance.

Dingess hit a gold mine with this book. It’s got a brilliant premise that uses the Lewis and Clark expedition to tell supernatural stories. The beautiful art and colors completely sell the idea that it takes place in the early 1800s. Once you pick it up you won’t be able to stop reading until you’re caught up. 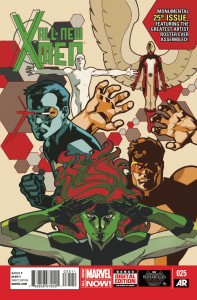 In the age of Marvel NOW, reaching issue 25 is a big deal. This book is billed as a “monumental” issue and features artwork by a long list of talented artists. We’re shown the good, the bad and the what-ifs of bringing the young X-Men into the present. The problem with this book is it does very little to move the overall story and is merely an excuse to showcase pretty artwork.

One of the few Marvel books I enjoy finally had a bad issue. Other than the amazing artwork there wasn’t anything surprising or special about this book. Beast is unable to sleep at night and so The Watcher comes and shows him visions of possible futures that will no longer happen because he brought the young X-Men into the present. He’s ensured that none of his friends will ever be happy. This scene didn’t need a book all to itself. In fact Bendis probably could have either pushed it into the next or spread even spread it out over the course of two, three or four other books. Instead he chose to use this story as a way to showcase other artists and that made this a forgettable book to me.

Story telling aside, the artwork in this book was impressive. The cover alone made this the first book I read. However it wasn’t enough to make me enjoy this more than I did. Unless you care about the art I would suggest skipping this book. You’re not missing much. 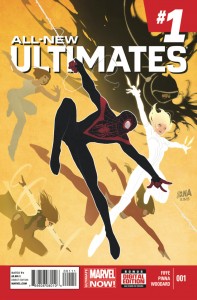 Galactus feeds no more! A redefined Ultimate universe sees new titles replacing the old. Exploring the post-Cataclysm world should start by addressing the major world issues like repairing the physical and mental damage caused by Galactus. However, Michel Fiffe dug right into establishing the new team and entangling them in their first story arc involving a local gang. I’ve grown to care about these characters after seeing them introduced and developed in the pages of Ultimate Comics Spider-Man. So it’s disappointing to see a title I was excited about fail miserably to deliver a good story.

Other than the characters themselves I couldn’t find a single positive thing about this book. The artwork didn’t impress. In fact, there was very little consistency in character appearance and most of the time they just looked plain awful. Facial expressions were the worst because everyone looked like dolls with poorly painted faces. The writing was filled with cliched, cheesy or unrealistic dialogue. People in real life do not talk like the characters in All-New Ultimates and neither do people in comic books. Awkward scenes like Cloak and Dagger rescuing Miles’ friend Ganke seemed to drag on forever. Instead of feeling concerned for Ganke I just wanted him to let Cloak and Dagger take him to the hospital so the scene could be over. Most of my time reading this book was spent like this. I just wanted to get to the end as quickly as possible.

In more ways than I described, All-New Ultimates completely missed the mark on delivering a good comic book. All the characters that appeared in this book didn’t even appear to be affected by Cataclysm! This represents the best way I can sum up my review for this book: devoid of emotion.