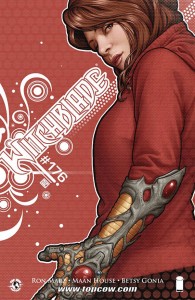 Boy, it’s been a long time since I’ve read an issue of Witchblade. Not because the book wasn’t any good, but when Michael Turner left the book it took some of the wind out of the sails for me. But it sounds like I really missed out on some good stuff. Ron Marz put together an extremely solid run on the title and after a break, he’s back for more adventures with Sara Pezzini and the mystical gauntlet that is the Witchblade.

These days, Sara’s no longer a New York city detective. After her own personal battle with the Witchblade and the fallout of the Artifacts series, she’s moved out of the big city and become the sheriff of an upstate New York county. Since I haven’t read this series in, oh, about 120 issues, this was quite a change of pace from the mystical, sexed up title I was used to. Instead, this version of Sara reminds me very much of Fox Mulder as she investigates supernatural occurrences and uses the Witchblade’s power to defeat the baddies she comes across.

This particular issue finds Sara investigating a case of two missing boys and a very suspect graveyard for old amusement park rides and attractions. Of course it’s manned by a creepy old dude and his grouchy rottweiler. Sara’s detective’s intuition gets the best of her and despite any evidence to the contrary, she knows something ain’t right with this carney folk. She returns with her partner Deputy Mooney and upon breaking into the yard they discover the owner and his viscious dog are not at all what they appear to be. After a short battle with the Witchblade taking her over in its familiar full body armor, they are able to retrieve the boys from what appears to be an alternate dimension. As for the creepy carney guy, he’s apparently off to where he came from, free to continue his pursuit of fresh blood and the perfect funnel cake.

I enjoyed this issue of Witchblade, even if the dialog and flow of the story was somewhat stilted. It never smoothly transitioned from one stage of the story to the next, they felt a bit broken up. But it was it was refreshing to get a standalone story with a self-contained beginning and end. As I mentioned before, this new Witchblade seems to be devoid of the gratuitous T&A that the older issues seemed to bank on. Sure, she showed some leg and cleavage when the Witchblade took over but nothing like the old days. So that’s kinda nice, it’s story focused and Sara as a character seems a lot stronger and self assured than she used to. I also like the X-Files-ish paranormal investigator direction of the title. In fact, it felt so much like an issue of X-Files you probably could have called the two main characters Mulder and Scully and it would have been a perfect fit. That’s a good thing for those following along at home. House’s art also complimented this type of story very well. For a book that no longer needs boobs to sell the story, her art was dark, dirty and moody. It suited this grungy carnival story nicely. The colors were also spot on, adding to the muted and dark undertone of the story.

This wasn’t an excellent issue of Witchblade, but it wasn’t bad by any means either. It featured a solid story, and while it was resolved relatively quickly and simply, it gave you all you needed for a standalone issue while staying true to the series. I’m not entirely sure it convinced me to start reading regularly again, but it definitely changed my mind about what Witchblade is nowadays and I’ve got a new appreciation for the title. I’ll definitely take another look at this book down the road. Baby steps right?

Score: 5 (out of 7) It took me a minute to realize that 120 issues is ten years worth of comics. That means A) I haven’t read Witchblade in a LONG time and B) I’m old enough to miss out on ten years of a book. Lame.