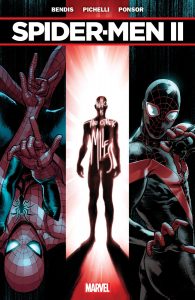 Almost five years ago, Marvel finally crossed over its main 616 universe and the Ultimate Universe (RIP Earth-1610) in Spider-Men when Miles Morales and Peter Parker teamed up to fight a dimension crossing Mysterio courtesy of writer Brian Michael Bendis, artist Sara Pichelli, and colorist Justin Ponsor. The big dangling thread from that storyline was that Earth-616 also had a Miles Morales. In the intervening years, Miles has migrated from the Ultimate Universe to the main Marvel universe and has his own comic, Spider-Man. His pretty substantial presence there begs the question: did Spider-Men II need to be made? The answer so far is that Spider-Men II isn’t essential reading, but it has potential especially in regards to Pichelli’s art.

Spider-Men II #1 begins in a pretty generic action-y in media res with Miles and Peter hanging upside down and bickering like an old married couple. Later, Miles fails to jump on a plane to get some mysterious thing, and Peter dresses him down and says he’s not worthy to be Spider-Man. It’s like the comic decided to start with the beginning of the third act from one of the Lethal Weapon sequels. (The buddy cop theme continues with some funny references to 21 Jump Street made my Miles and his crush du jour, Barbara Rodriguez.) The genericness continues to the character of Peter Parker, who is stripped down to the basics: bad luck, self-deprecating jokes, webslinging. His fight against Armadillo is overlong if acrobatic, and Peter’s scenes lack energy compared to the fast moving, varied banter of Miles, Ganke, and his friend group, who were all created by Brian Michael Bendis. Things pick up a little bit when they team up highlighted by a surprising common foe and fitting a summary of the original Spider-Men in a single word balloon. 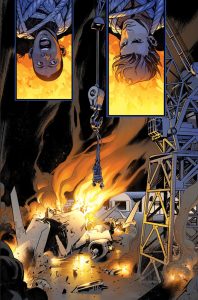 Sara Pichelli is one of those great artists who can find the sweet spot between cartooning and photorealism, and it’s nice to see her drawing not one, but two Spider-Men in this book. Her big moment isn’t the cold open or the fight against Armadillo, but a double page spread of banter between Miles, Ganke, and finally, his crush Barbara. Pichelli knows the right moment to cut to Barbara just when Miles is getting embarrassed and is afraid he might get overheard by her. Colorist Justin Ponsor gives her hat a distinct color that draws the reader’s eyes to her and made me feel secondhand freaked out for Miles in the situation. It’s just plain fun to see Miles act like a teenager and not deal with crime lords or alternate dimensions for a hot minute. Villains and strange portals do show up later because this is an “event” comic, though.

Even though Peter Parker is written pretty one dimensionally, Spider-Men II #1 soars into possible must read territory as Brian Michael Bendis, Sara Pichelli, and Justin Ponsor actually deliver some nice payoff on the final page. If you’re a casual Spider-Man fan, maybe sit this one out, but Bendis writes Miles Morales better here than the past few issues of his solo book and the Secret Empire shenanigans he’s gotten into.