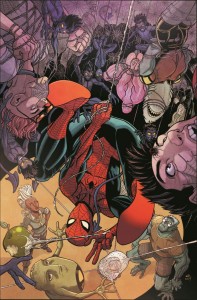 My favorite superhero joins the ranks of my favorite team, in theory that sounds amazing. While I enjoyed this first issue, it certainly isn’t perfect. The issue starts out with us finding out that Logan wanted Spider-Man to come to the Jean Grey School to be the Guidance Counselor. We learn that there is ulterior motive for Logan wanting Spider-Man to come teach a special class at the school, Logan fears there is a mole amongst the students. And that is the special class that Spider-Man will be teaching: Eye Boy, Glob Herman, No-Girl, Ernst, Hellion, Shark-Girl, and Rockslide. This group of students doesn’t have quite the chemistry that I had hoped, but we will see where this series takes them.

The candidates for potential moles are introduced rather quickly and some of them seem silly. Silly, as in I have read many stories featuring them, and I feel like the idea of them working for someone else makes no sense story-wise (Ex. Hellion, Rockslide, and Eye Boy). Some of the dialogue was a little strange, but I feel the biggest fault of this issue is the plot seems very weak. I think with bringing such an iconic character to a team like the X-Men, I wouldn’t have based it all upon a creeping suspicion that there is a mole. Cause ultimately, what if Logan is wrong?

What I did like about this series is that it does have the same feel as of Wolverine and the X-Men written by Jason Aaron. It had some good character moments and some good humor. The thing that worries me is the plot, how long can this potential mole storyline be drawn out? Because after that I feel like Spider-Man would have fulfilled his responsibility and go back to doing whatever a spider can. The art for this issue was fantastic. Personally, I think it is the biggest incentive to pick this series up. I like the way he draws Spider-Man and the rest of the cast. The colors are very nice in this issue as well, they don’t overpower the artwork. Visually, this book is very appealing.

Rating: 5 (out of 7) – All in all this is a fun issue; I unfortunately don’t see this series lasting long though.