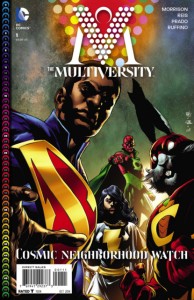 The fate of the 52 worlds rests in the hands of Earth 23’s Superman. The Multiversity is a story that’s been long in development for Grant Morrison. Think of it as the Justice League meets Stormwatch meets Inception. A mysterious threat is attacking DC’s Rainbow of Worlds —the New 52 worlds— and the best of the best heroes from those worlds are chosen to defend them. I’m not a big Morrison fan, but there’s a lot of wonder in this book that make it a spectacular ride.

Grant Morrison’s run on Action Comics gave me a headache. I feel like I’m just not smart enough to fully enjoy his stories. So I was a bit apprehensive about picking up this book. Trying to figure out what was going on still gave me a headache, but I enjoyed it. Basically, it’s a Justice League story but the members are pulled from the different Earths. There are captions at the beginning that seem directed at the reader and accomplish the task of pulling you into the story. It was weird at first, but once you just accept it and go with it, it gets exciting. Some may find them confusing but thankfully for them the entire story isn’t told in this manner.

Joe Prado and Ivan Reis, naturally do a phenomenal job bringing this story to life. From cover to cover this is a beautifully strange book. The superheroes look as wondrous as you’d expect but where the art really shines is the blending of the weird, baffling and incredible. Several moments in this book were so weird that I couldn’t believe it was a DC book. There’s a panel in the beginning that was a bit creepy and another a few pages later that had me wondering what I was even looking at. These are all great things because they made it difficult to predict what was going to happen. For example, what Nix Uotan finds on Earth 7 had me re-read the entire scene several times because there was so much to take in. That can be said about this entire book.

Pick up this book if you haven’t already. If the art and story don’t amaze you then the DC version of the Avengers might amuse you. Heck, this book is filled of wonderful looking characters that should delight or amuse anyone. I’m so pumped to see what Morrison has in store for us in the coming months. This first issue alone set up the story in an epic way and it’s almost criminal that DC is going to drag this out as long as they can.