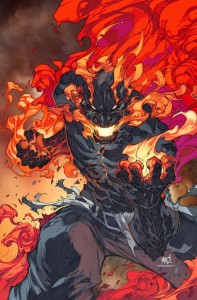 During Infinity, Black Blot was forced to detonate a bomb on Attilan. The result was Attillan ending up in the Hudson River and the Terrigen Mists spreading across the globe. Inhuman is the story of people who thought they were ordinary and have been exposed to the mists, transforming them into something more than human. Black Bolt is in hiding leaving Medusa to lead the Inhumans of Attilan and suddenly they aren’t the only ones on the planet anymore. In the first issue we met Dante and he has the ability to burst into flame. He was being recruited by a mysterious Inhuman named Lash and Medusa came to the rescue to save both Dante and his sister.

This issue Medusa gets another visit from our favorite star-spangled Avenger as Dante starts to train with Gorgon to control his new abilities. Medusa certainly steals the spotlight in this issue though with her very badass moments. To be honest, this issue was a little too boring for me at some points. Infinity ended in November (about 6 months ago) we have had two issues of Inhumanity as an “Infinity aftermath/Inhuman prelude” and one issue of Inhuman since then. The delay is really hurting this book, Â it almost seems irrelevant because all the Inhumanity tie-ins have finished, this book is just starting and it feels like no one is talking about it in the Marvel universe anymore. I have very high hopes for this book with Charles Soule and Joe Madureria as the opening creative team and Ryan Stegman joining with issue #4. I just really wish there wasn’t so much time in between issues; hopefully it can come out more consistently sometime soon.

The art is certainly the high point of this issue. Joe Mad’s work is absolutely fantastic. Hands down one of my favorite artists in the industry and I’m really glad he is doing the occasional arcs for Marvel (Avenging Spider-Man and Savage Wolverine). Until he started on this book I do not think I have seen him do the Inhumans I was surely missing out because they are great. To me the art alone is almost worth the price of the issue.

Rating: 5 (Out of 7) — Awesome art, cool characters, but the fact that it has been almost 2 months since issue #1 doesn’t have me very invested.