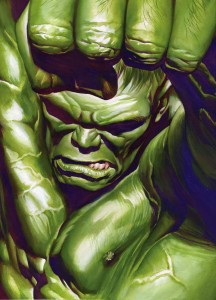 This is the first issue from new writer Gerry Duggan and he starts off with a bang! If you’ve been keeping up with this title you know that Bruce Banner was shot in the head and suffered brain damage. Tony Stark helped “fix” him by using extremis technology. It worked a little better than Tony had predicted and resulted in creating a very smart Hulk. Other than the Hulk going after Tony Stark in the Original Sin: Hulk vs. Iron Man, this is the first we see of Hulk’s new persona and it is frightening how intelligent he is. It’s as if Bruce and Hulk are finally one in the same, which sounds extremely dangerous.

This issue, we find out what the Hulk is up to and by the end we know who he’s going after and why. I like the way the issue progresses even though there weren’t any surprises, it just seemed very natural. What I really like about the issue is that I have never read a Hulk with this personality and it makes for a fun read because I don’t necessarily know what this Hulk is going to do. I like seeing the other characters who know either Bruce or the Hulk react to how different he is. I think this will create some interesting character dynamics especially with the plot of getting rid of gamma weapons. And that list may include some friends and foes; does this new Hulk have what it takes to accomplish this?

I was a big fan of Waid’s run on Indestructible Hulk and enjoyed the Original Sin mini but this was the first issue of the new volume of Hulk that had me thoroughly engaged. The first four issues were just okay to me and this one was such a nice change of pace, I don’t know if it was because story wise it’s something different or because the new writer is adding a little bit more to the characters and story. I like that we are reintroduced to Bruce Banner’s team of scientists from Indestructible Hulk and look forward to seeing more of them and how their interactions are since they are no longer working with Bruce.

I absolutely loved the artwork in this issue; Mark Bagley’s art is just some of the best. I’m glad he stuck with the book after Mark Waid’s departure. His Hulk, excuse me, Doc Green looks pretty dang cool especially with his Mohawk. It is a very distinct and modern look for him, although it looks like he gets his hair cut at the same place as Storm. And I can’t forget to mention the awesome cover by Alex Ross; it’s nice to see him doing covers for Marvel again!

Rating: 6 (Out of 7) – Great issue from new writer Gerry Duggan and fantastic art brought to you by Mark Bagley. Worth checking out!