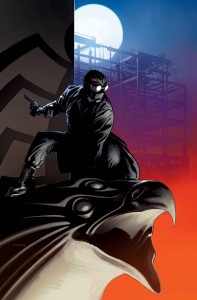 This issue was my first time reading Spider-Man Noir; I didn’t pick up any of the Noir series’ when Marvel published them a few years back. David Hine and Fabrice Sapolsky did a great job of making this series accessible to someone who has never read Spider-Man Noir before. I am looking forward to the other Edge of Spider-Verse tie ins because I wanted to learn more about the alternate versions of Spider-Man. I like watching Spider-Ock running around the time stream/multiverse saving and subsequently recruiting these fellow Spiders because it shows that his time as Spider-Man did change him for the better.

I like how the issue plays out and has us get to know this version of Peter Parker a little bit by alluding to his past accomplishments as well as briefly setting up a few plot threads for the upcoming Spider-Verse event. And I’m glad that the majority of the issue was focusing on this Peter and not necessarily how he fits into the bigger story. That part, I’m sure, will come later. We get to see a lot of familiar faces throughout the issue: Peter, Aunt May, Mary Jane, Wilson Fisk, Black Cat and Mysterio are the big ones. Which helps ground us in this reality and believe that this Peter Parker is Spider-Man because it seems familiar. Overall I really liked the pacing of this issue and how things played out. I’ll be back next week for Spider-Gwen!

The artwork is fitting for the time period, maybe that’s because Isanove just had a run on Savage Wolverine also taking place in that era. The artwork isn’t my favorite, but it still is a nice looking issue, I certainly didn’t hate it. And every issue for this mini-series has a different artist so I look forward to seeing some other art styles on the books. I really liked the Spider-Man Noir costume in this issue; it reminds me a lot of Peter’s Symbiote costume (or better yet, Agent Venom) just without the big white spider sprawled across the chest.

Rating: 4 (out of 7) – This is a good first issue if you are looking forward to Spider-Verse. If not, go ahead and skip it.