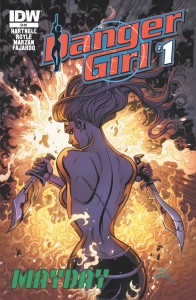 Danger Girl: Mayday #1 is based on the once hugely popular franchise created by Andy Hartnell and superstar artist J. Scott Campbell. The super sexy team of Abby Chase, Sydney and Sonya Savage, Valerie and the venerable Deuce fight the forces of evil around the globe to keep the world safe. At least, they normally do. Not a single one of them appears in this issue. Rather this appears to be a setup for the return of none other than Natalia Kassle, the sleeper agent long thought dead by the team. Dun dun DUN!!

Unfortunately, it takes half the book to set up this shocking turn of events. We’re taken back to the past and introduced to a new, albeit nameless, dangerous lady who appears to be a mercenary or a pirate depending on how you lean. She’s hellbent on taking over a merchant vessel in search of valuable cargo. While she’s smacking the captain around their ship comes upon a mysterious island that appears to have been blown up very recently. Instead of steering around it, they start grabbing wreckage out of their path with nets. Makes total sense so far. One such net full of debris happens to be full of knives! As these lethal weapons fall to the deck so does the flaming body of Natalia. Somehow she’s survived being frozen solid in remote waters and now from being blown up. We then abruptly shift to a flashback of Natalia’s betrayal of the team, her fallout with Major Maxim and her subsequent entombment in ice that has lead to her present state and finally an awakening. Finally, the book ends with Natalia, years later in a mysterious temple, restored to her former physical glory but suffering total memory loss, being observed by our mystery pirate. Who no doubt has less than noble intentions for our leggy Russian. To be continued indeed!

I really enjoyed the original Danger Girl series back in its heyday. An original member of the Cliffhanger imprint, Hartnell and Campbell had created a book that was 100% guilty pleasure. Sexy spies running around in Indiana Jones style adventures with no apologies about its cheesecake or its cheese, it was simply a lot of fun. It still stands as my favorite body of Campbell’s work to date, even eclipsing his excellent run on Gen13. Campbell, despite the continued clamoring from fans, has not relented and returned to draw a monthly series since. His hyper detailed pin-up style just can’t keep up with a monthly book so he’s apparently given the reigns to co-creator Hartnell permanently. Aside from a few covers and promo pieces he’s not had any other involvement in the series that I can see. Hartnell has done well to keep the tone of the mini-series in line with the original book, but honestly who’s paying attention without Campbell holding the pencil? I certainly haven’t. I’ve tried to read a few since then; Back in Black was fun, Revolver and The Chase had some pretty decent art thanks to the likes of Talibao and Bradshaw but really without Campbell the band just doesn’t sound the same.

This first issue of Mayday suffers the same fate. Royle’s art is actually pretty good here, he does a great Campbell impression and his style is fast, sexy and dynamic. There’s a few anatomy issues but it’s not like Campbell is a stickler for realistically representing the female form either. So it’s a decent enough facsimile of what you’d expect from a Campbell-drawn DG book. Hartnell’s script is the main issue however. I understand that he’s telling one story from two separate timeframes and perspectives. But the split in the middle is so disconnected in its transition from the intro you might as well be reading two different comics. The story does its best to merge at the end and lay the groundwork for the path forward this series, but I still felt like it was too disjointed and vague overall.

I suppose if you’re a hardcore Danger Girl fan then this book promises the return of an original cast member and sports some nice artwork, so it would be worth your $3.99. I think for anyone else, especially for someone picking the book up off the shelf for the first time, it’s a very confusing story with some pretty visuals. If impossibly tiny waists and pointy knives are your thing then this is a no-brainer!

Score: 3 (out of 7) Remember chromium covers? Yeah, I bought 25 copies of Danger Girl #1 back in ’98 to get my special chromium version. But it was totally worth it, it’s so shiny! If you want to buy a copy of #1 let me know, I’ll cut you a great deal.