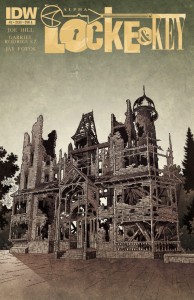 It’s been sitting there for about an hour. I can’t bring myself to open it, knowing it’s everything I expect, and it’s also nothing that I want. It’s full of endings and I don’t want it to end. As with anything you love, you want it to last forever but all love stories must come to an end eventually. Some never get off the ground, some end before their time, and some know when it’s time to turn off the lights and say goodnight. Locke and Key, as a series, has told it’s last story and it’s the perfect time to embrace everything that made this book so special and also time for me to admit it’s time to blow out the candle.

Alpha is the final culmination of Hill and Rodriguez’s masterpiece. In two issues, and beyond all belief and expectation, it completely ties up every loose end and leaves us with a very satisfying goodbye for the Locke family and the world we’ve been immersed in since Welcome to Lovecraft. I almost never feel this way about finales, but these final two issues were everything I wanted from the ending of L&K. Well, ok, almost everything. I still wanted to see a few more keys dammit.

What the duo of Hill and Rodriguez have given us over the previous five volumes of the series and including Omega and Alpha has been nothing short of incredible. It’s been storytelling at it’s absolute finest, literally and visually. Rodriguez, appropriately enough with his background in architecture, has crafted a world so solid that I’m constantly disappointed there’s no actual Keyhouse to visit in real life. He painstakingly created every room, board and nail of this house and maintained it throughout the series, so much so that Keyhouse breathes with it’s own life just as much as his characters do in every panel. And his characters. Each is so unique, so human, and so identifiable. Even the ones so evil you want to tear them off the page. I’ve loved gazing at every panel of this series, marveling at all the detail and precision his puts into this book. His method of repeating panels with subtle changes from one to the next becomes an exercise in puzzle solving. It’s truly just a joy to look at his work every issue.

Mr. Hill’s done a pretty darn good job himself. I’ve been reading Joe’s work for many years now and L&K stands out as some of his best even among his prose works. Which when held up to Horns, 20th Century Ghosts and NOS4A2 is quite a statement. Personally, I’ve never tried to compare Hill’s work against that of his father’s, a little known writer by the name of STEPHEN KING, but it’s impossible to say that storytelling isn’t in the genes of these two men. As is creating characters and worlds that are so believable and relatable for readers. I think if Joe wanted to keep this story going with new keys, new enemies, and new worlds he certainly could have with very little effort. The concept of this book has always inspired in me limitless imagination and possibilities, even within the confines of the Locke’s story. I hope they will make good on The Golden Age and continue with side tales of Keyhouse’s and the key’s history, I think this could be mined successfully forever if these guys had the energy for it. Joe’s achieved a level of storytelling in comics that is typically only seen from the Gaimans and Moores of this world. This is how it’s done people.

I suppose it’s time to get all of the cliche superlatives out of the way and simply say: gentlemen, it’s been quite a ride. Thank you for this series and for the journey you took us on. Thank you for Keyhouse, and for the Lockes, and for those amazing keys that were just such damn fun to read about. It’s true all good things must come to an end, and it was truly an ending that lived up to the expectations. I’ll miss wandering the hallways and endless doors of this series, but as I saw someone so eloquently post on Twitter today, perhaps someday I’ll come across my own Head Key and dump all my memories of this book, so that I can go back to the beginning and enjoy it all over again. If you have any love for comics, or just great stories, you must read Locke and Key.

Score: 7 (out of 7) If Joe Hill ever used the Gender Key, I don’t believe it would have the power to negate his luxurious facial hair.

What did you think about Locke & Key: Alpha? Let me know in the comments or shoot me a Tweet (@lanzajr26)