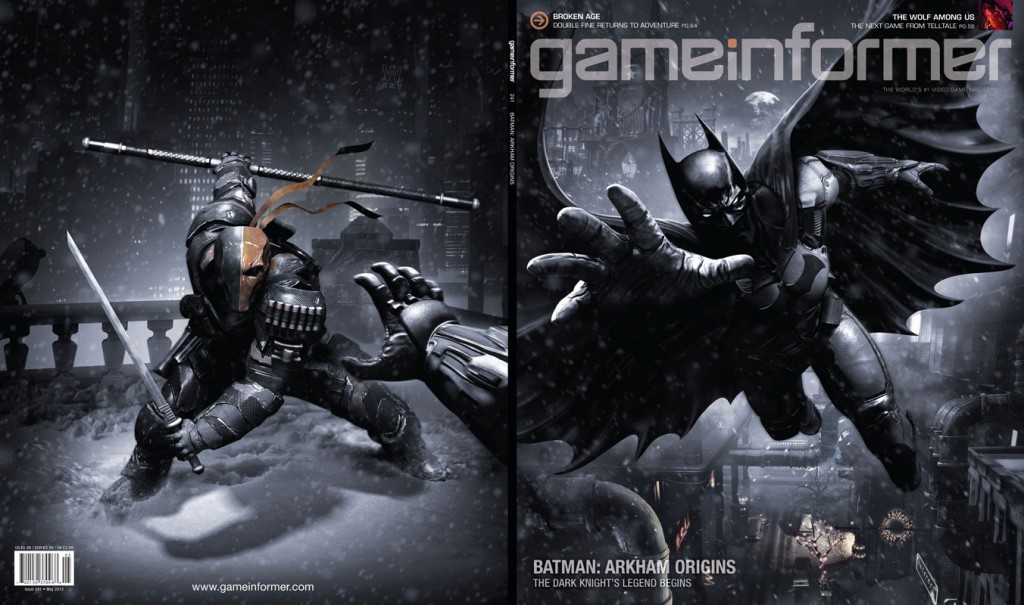 We’ve known there’s been something going on in the world of Batman games, but this morning Game Informer announced its cover story for next month, revealing the Caped Crusader’s next interactive adventure: Batman: Arkham Origins.

Arkham Origins is apparently slated to hit shelves on October 25 of this year on PC, Xbox 30, and PlayStation 3 (no word on potential next-gen versions). Interestingly, the game is not being developed by series creator Rocksteady Studios, with WB Games Montreal taking over the development reigns. However, WB Montreal reportedly has “full access” to Rocksteady’s development tools and customized Unreal engine that powered Arkham Asylum and Arkham City. Origins will be headed up by Eric Holmes, lead designer on The Incredible Hulk: Ultimate Destruction and Prototype, strongly suggesting the prequel will once again eschew Asylum‘s focused pacing for City‘s open-world approach. Deathstroke, visible on the backside of Game Informer’s cover, is the only villain confirmed so far, although we know that if the Joker ends up making an appearance he won’t be voiced by Mark Hamill.

But that’s not all, folks! Game Informer also reveals that a separate 3DS and PS Vita title, Batman: Arkham Origins: Blackgate, will be releasing the same day as the console version, courtesy of Armature Studio. Blackgate–which will take place after the events of Origins proper–is reportedly a 2.5D Metroid-style exploration sidescroller, and Game Informer notes that developer Armature was founded by several leads from Retro Studios’ Metroid Prime trilogy.

While a new Arkham game is now officially confirmed, there is still official no word on what Rocksteady has been up to since shipping Arkham City in October 2011. Previous rumors have suggested they are working on a Batman game set in the Silver Age and featuring the foundation of the Justice League. That game had also been rumored to be a prequel, though the announcement of Origins certainly makes it seem like rumor lines got crossed between what is likely two separate Batman games. It could be that Warner Bros. wants to tap the Arkham well one last time while Rocksteady works on a wholly new, next-gen Batman experience.