The A-Z of Geek Cinema: E is for Excalibur 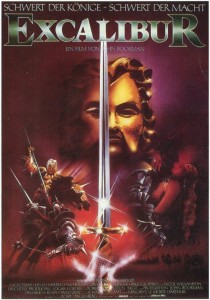 The King Arthur legend is a weird one. With roots in both traditional British myths and French fables, as well as what some have come to believe as historical fact, the legends have been warped by time and tide, and by pop culture, becoming something almost wholly different in the process. And while John Boorman’s Excalibur is not innocent in this, it also brings a weird reality to the proceedings that melds strangely with the more mythical elements of the story to create something new and different.

First, let me get this out of the way right off the bat: holy shit, the cast in this. I’m going to throw some names at you. Are you sitting comfortably? Then we can begin: Patrick Stewart, Liam Neeson, Gabriel Byrne, Helen Mirren. Not the lead characters. I KNOW, RIGHT? But no seriously, this is a stacked cast. Add in the over-powering presence of Nicol Williamson as Merlin, and you’ve got one for the ages. To be fair, Nigel Terry never seems to distinguish himself as Arthur, and Nicholas Clay & Cherie Lunghi as Lancelot & Guenevere are no great shakes either. But I’m not sure how much fault lies with the actors in this case, and how much with the script. More on that in a moment… 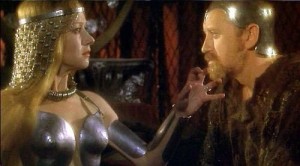 Here is the section where I talk about how gorgeous Helen Mirren is in this. Because good lord. This was her in prime form, and the costuming seems designed to show that off. I mean, seriously, she was amazing looking in this. And Boorman knew it. The tension between her and Williamson was palpable as well, due to some previous off-screen relationship, and it plays well into the Morgana/Merlin dialectic.

The look of the film, too, is something that deserves to be pointed out. I would almost gather that Boorman was taking his production cues from Monty Python & The Holy Grail, as the “smoke and mud” look of the vistas almost match the earlier film exactly. Most medieval films prior had made everything look clean, with the knights all in shining armor, and the Pythons’ film was almost revolutionary in their choices to show the muck & mire that they’d have actually lived in. Boorman does the same. And it extends to the fight choreography, which is not the graceful “swing parry lunge dodge” most earlier films showed. It’s all clumsiness and bulky armor, slogging through mud and swinging haphazardly. 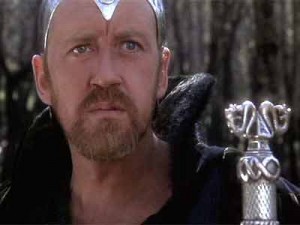 But this is not all praise and marveling at early 1980s breasts. There are some weird problems with this movie. The script, for one, is all over the goddamn place. It spends an inordinately long time in the pre-Arthur days, drops us  back into the story literally moments before he finds Excalibur, and then sort of flits and starts through the story beats that almost everyone knows by now: Lancelot, Guenevere, Percival, the Grail, Mordred. But there is no connection to it. We never really get to know Arthur as a man or as a king. He’s a baby, then he finds the sword, then he’s king and everyone says the land is peaceful and great. We’re not shown anything really. When things take a turn after Lancelot’s betrayal, we’re told “oh everything is terrible” and all that is shown is some people working in a muddy field and Arthur looking like Theoden pre-Gandalf-ing. I realize some short-hand must be established, but to expect the audience to care about characters, you must make them want to. You can’t just wave your hands at them and go “uh… oh… uh… MYTH!” 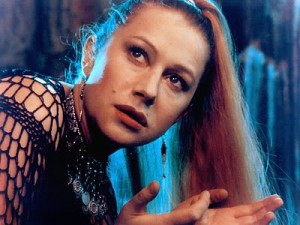 Boorman had some weird hangups, I’m assuming. Because, when you take this film in account with some of his other works (one of which will be popping up much later in the course of this column), I’m going to assume he has some… problems with women. Every woman in this movie is either portrayed as lustful or deceitful, and the cause of all the problems that are besetting the men AND the kingdom. Which makes the fact that he cast his daughter Katrine as Igrayne, Arthur’s mother, who has a very strange sex scene with Arthur’s father wearing full armor, kind of disturbing.

There’s other story issues I have with the film, but those are ones that are inherent in almost any Arthur story told now. The original legends have been warped and transmogrified by time, combined with others, told and retold, that anything resembling what they once were or could have been has been lost. Truthfully, if Arthur existed in the time he was supposed to have, it was way pre-Dark Ages, with no fancy armors or castles. He would’ve been little better than a Viking lord of some sort. Lancelot & Guenevere’s entire plot line is lifted wholesale from Tristan & Isolde. But these are complaints that I can hardly bring against this film, as they were in the source material, which was drawing from the novels, which were drowning from the poems, and so on.

After all is said and done, it’s a film I liked. Maybe not as much as I did when I was younger. Too much book-learning can make it hard to enjoy things I once did, I suppose. I know too much about the originals, and about where they come from, to fully buy into the world. The short cuts taken story-wise bother me too, but the visuals and acting on display more than make up for it. And also: Helen Mirren.