[After creating and then testing the drinking rules, Swan and Penguin recap their adventures with the movie. Offering their thoughts on the quality of the film itself, as well as how the drinking rules held up, and if worth using.]

We watched the original Ghost Rider film early last year, around the same time, both Swan and I were left a bit disappointed with that film. Ghost Rider: Spirit of Vengeance is kind of a sequel, but also pays no attention to anything from the first film. Does removing the baggage from the original film make it a better movie? Find out now! 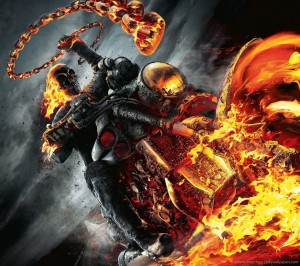 Movies like Ghost Rider: Spirit of Vengeance are what make me glad I do this. I may have to suffer through a month or two of hard-to-watch garbage but it is all worth it when I get to watch something like this. This movie, to me, is the definition of a fun movie. The action scenes were awesome, Nic Cage as always was ridiculously awesome and I did not lose focus through out this whole thing.

Having said that, I can not remember a thing about the story. Something about the devil and a kid? That being said, this movie is a must watch, the action and acting will keep you invested when the story will not.

I will agree with Swan here, one of the reasons we do this is because sometimes you find a gem among all the crap. A movie that embraces itself and just sets out to have fun. Ghost Rider: Spirit of Vengeance is one of those movies. I mean we get TWO scenes with Ghost Rider pissing fire. Does it add anything to the movie? No. Is it fun to see? Hell Yeah.

Not only that, but this is such a great action movie. It full embraces the darkness in the character without making it too graphic or violent. Actually, it does a terrific job of making the violence stylized. The fight at the construction site is one to behold and of course the climax is pretty damn boss as well.Â

Unlike Swan though, I do remember some of the plot, I just didn’t care for it. Something about the Rider being the spirit of a fallen angel who was captured and tortured, and a son being the son of the devil and some cults and the likes. It doesn’t really matter when the action distracts you from the nonsense of the words!

There is nothing better than a great movie that works perfectly to our rules. We drank a lot during this movie, with every rule kicking our patoots. People were dying left and right, sometimes even exploding when they died, giving us a twofer. Rider and Devil may be the two most spoken words in this film as well. Surprisingly the rule that gave us the least amount of drinks was the transformation one, all because he gives up the Ghost Rider power halfway through the movie only to get it back near the end.Â

As I said before, definitely check this one out, and our rules would certainly work if you choose to drink to it.

There was about 2Â occasionsÂ during the film where we decided we had to finish our drinks and not because of rubber nipple but because of the insane amount of deaths on the screen. There is a scene where Ghost Rider has to slay at least 20 people in about 10 seconds. It was an awesome scene, but oh so bad for the liver.

In addition to the death rule, “Devil” and “Rider” were said often. I guess since Ghost Rider’s spirit is referred to as simply the “Rider” . There was a fair bit of explosions on display as well. And so glad we didn’t go with a last minute change to do it whenever something was on fire.

Sadly, the transformation rule didn’t gain much traction, but then again you don’t want to overuse the gimmick. It was always fun to see, and we had enough to drink anyhow!

Ghost Rider: Spirit of Vengeance is a great reminder why we do this. It is a fantastic action movie that may get grief because it’s plot is paper-thin and nonsensical and acting wouldn’t win any awards, but it’s creative with it’s action and kill and never really glamorizes it. It also made for a hell of a drinking game. Whether you watch it solely for entertainment or to get wasted, we’d recommend this film!