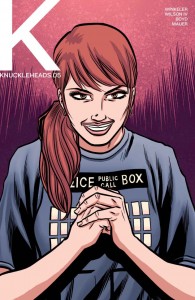 I struggle with comic books that use humor as their driving force; especially a comic book that is primarily a superhero book. Sometimes it’s hard for me to disconnect the two and also enjoy them as a whole. When a superhero is fighting a monster and saving the day, that is what I’m invested in. His cute little quip about the monsters hair or pants or whatever is usually lost on me.

Luckily, Knuckleheads #5 deals primarily in the humor department. This issue has a major plot point tied to the end of the issue, but other than that, not much else happens. But that’s the beauty of it. We get an issue full of personality, wit and humor. Brian Winkeler takes a bit of a break in regards to the “superhero” side of the story and lets the reader enjoy the mixture of characterization that exists in this series. It’s mainly a talking heads issue but the heads say things that are funny and entertaining. Nothing feels over written or stretched and the story moves at a decent pace allowing each character to get a bit of the spotlight. Simply put, this is a fun issue.

Robert Wilson IV and Jordan Boyd handle the art duties and unfortunately nothing really stands out. Â The majority of the book had the same five panel grid or some variation of the five panel layout. Characters felt static and stiff and the colors while slightly varied don’t do much to add to the book – too many beige backgrounds for my taste. It’s hard to make talking heads and standing bodies look interesting but they do the best with what they’re given.

Knuckleheads is a story that is character driven. The humor and personality is what pushes this book forward and on that front this book is a shining success. Would have loved to seen some creativity on the art side of the table but overall this is a solid issue.