Pulse was certainly a movie. That much I am able to confirm to you right now, if it was good or bad, I honestly have no clue. To be honest with you, I really don’t know what was going on in the movie.

But for a summary, er, there are some creatures that live inside the network and they’ve been set free. They are using forms of technology (computers, cell phones and printers) to get into our world and force people to kill themselves. The heroes discover this, and attempt to stop the plot. Of course folks are killed off in the process, and red tape is their weakness… don’t ask me!

That’s the movie in a nutshell, I hope. Anyhow, let’s get to the score board!

Where do I even start with this one? It was an emotional roller coast! At the beginning I was bored, then I got angry, then for some reason I got super excited and happy and for the last half hour I was just waiting for it to end. I mean….this movie is something. I don’t think the writers have any idea what was going on. It had a clear purpose starting out, it was a rip-off of The Ring based more around technology, it even has same colour palette and the dream sequences in Pulse were almost identical to the tape in The Ring. It honestly got to the point of being funny how hard they were trying to copy it. And now we come to the acting, it was excruciating, to the point of being worse than physical torture. The thing about that though, is I don’t know which was worse, the acting or the dialogue. I guess I should wrap this up soon or I will keep on with my rambling, I just have one final thing to say about my experience watching this movie. POOR KRISTEN BELL! I like Kristen Bell, she is adorable, she seems like a good person and has been good in everything else I have seen her in, and she has to say she was in Pulse…. Jesus!

There was nothing redeeming about this movie. I use to say I’d rather a bad movie over a boring one, I’m going to have to add a 3rd category because this was just nonsensical. I mean from start to finish this movie made no sense. I still don’t know if it was meant to be horror or a thriller (it does neither well) and the red tape being their weakness was so so terrible.

But even with a terrible premise, what really pushes this movie over the edge is its terrible climax. Our heroes drive away in a car to be attacked by these creatures because Kristen Bell won’t just dump her phone! And once they hit a coverage dead zone, they are safe…movie over. Yes, a lack of cell phone coverage saved the day. Poor Verizon dude is going to be out of a job if this gets out! 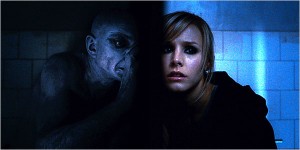 Can you hear, what I hear!

This was a weird one for drinking, we drank a lot but primarily out of confusion. Yet I don’t remember much drinking. I know Penguin called in Rubber Nipples just past the half way mark but…..think was alot of drinking before that. I know that my left arm is kind of numb right now and I don’t think I can walk but think I could have drank more. Our rules may have worked, if you can last through whole of movie.

I honestly don’t know how to gauge this, Rubber Nipple was called around the 50 min mark which always increases the drinking. And I called it not because of a lack of drinking, but simply to make it through the movie because I had no idea what was going on. It probably doesn’t seem that important to many, but knowing what’s going on in a movie does help with your drinking at times. If nothing else, you need to know circumstances at times to call some of the rules. Trying to make heads or tails of the movie while remembering these rules was just a pain. It was fine drinking though. So I’ll split the difference.

Pulse was a movie, it wasn’t a fun movie and it wasn’t the best drinking movie, but it was a movie. After going through it though, I would be very hard-pressed to recommend anyone watching this movie drunk or sober. It just isn’t really well made and the plot and acting is a mess. Just take our word for it and give it a pass.