“Never judge a book by its cover,” but sometimes you just see that one book out of the corner of your eye that catches your attention. It intrigues you to no end and you must find out what’s inside. The X-Files Conspiracy Teenage Mutant Ninja Turtles was such a book for me. 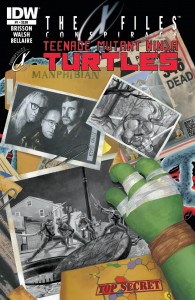 At first blush, this idea both seems confusing and makes perfect sense. Confusing in the sense that tonally combining two very different types of universe. But at the same time, if you are research extraordinary phenomena,Â in the world, giant humanoid turtles would have to catch your attention eventually, right?

The X-Files Conspiracy Teenage Mutant Ninja Turtles seems to be both a standalone title and takes place during two different events. The X-Files part seems to be a continuing saga which is the backbone for this issue with the FBI investigating a viral threat that is set to hit the world in the future. They don’t know the source of this threat, but alien humanoid turtles seem like a possible cause. The Ninja Turtles are still reeling from the City Fall storyline. Having gotten out of New York City to recuperate, they are trying to lay low but trouble always seems to find them.

While it is important to know where these two series are converging from, the beauty of this issue is that it doesn’t punish you for not following either comic. If you’re a fan of the X-Files series, you get some goofy antics with the cast. If you’re a fan of the TMNT, you get some pretty solid action setpieces. Yet if you aren’t entangled with both series, this issue does a decent job of catching you up without weighing down the book with unnecessary backstory or exposition.

The story of the book itself is pretty out there. In the small town that the Ninja Turtles have taken up residency, there is an outbreak of vampire attacks. Between news of the vampires and the photo of a distraught humanoid turtle, brings the X-File gang to town. I was slightly disappointed that this wasn’t Mulder and Scully. Won’t say much on their role in this comic (even if they have one), but was a bit disappointed that it wasn’t centered on them.

Instead, we get a focus on The Long Gunmen. And after reading the issue, it makes sense since they go with a much more comical approach to their antics. Like I said before, the X-Files proper seems tonally different from Ninja Turtles, but by bringing in a more comical branch it does help the two universes meet in the middle proper. It works well and while the two sets of characters don’t spend a ton of time on page together, the few scenes they share are interesting exchanges.

If I had to level one complaint about the story is the core threat is never really neutralized. Instead, it is just kind of pushed out so that we can wrap up the crossover issue itself.

Unlike the story, I wasn’t as keen on the art. It isn’t bad, not even close, but it did nothing for me. I don’t know how to explain the style, but it’s like a comic out of focus. There’s no emphasis on anything. Not the characters, not the facials, not the backgrounds or foregrounds. Nothing stands out, which means it just doesn’t pop off the page for me. I guess it all feels a bit muted to me. It doesn’t hold back the comic though!

Review 6 (out of 7) – A fun little crossover issue. It’s worth the read for being solid, but also won’t miss much not reading it.Â