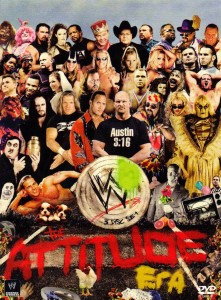 I’m taking a week away from the A-Z of Geek Cinema column to talk about the latest release from the WWE, its paean to the height of its past glory, The Attitude Era. Just put out last week on DVD and BluRay, the multi-disc set contains a documentary covering the circumstances and players behind what many consider the WWF/E’s biggest successes, as well as many matches and promos that exemplify the era.

All the players you’d expect make an appearance, for the most part. Vince McMahon, obviously. Triple H is a big presence, as the rise of Degeneration-X is often heralded as a large part of the time. Stone Cold Steve Austin speaks to it, as the biggest star from the time, and probably the singular force that started it all. Road Dogg Jesse James has a large speaking presence throughout the documentary, which surprised me to a certain extent. Though I suppose it shouldn’t, as he played his part in the era, as well as continues to be an agent with the company.

The biggest surprise, to me at least, was the brief inclusion of Vince Russo. One of the architects of the Attitude Era, Russo was bounced from the company towards the tail end of the times and went to WCW, where he proceeded to try to replicate his success there, with little to no avail. As far as I was aware, he was on WWE’s blacklist, so imagine my shock when he did a brief talking head appearance.

The documentary itself is up to the WWE’s normal standards, in terms of production and gloss. The company has some of the best video producers and editors in the world, and this is no exception. The only problem I have with it is it seems too short. For a time so important to the company, and to wrestling history as a whole, an hour plus seems far too little time to spend discussing the ins and outs. I wanted more analysis, more behind-the-scenes talk, like a lot of the individual superstar DVD docs they’ve done. It ends up being a more general look at the time, with some focus given to guys like Stone Cold, D-X, Val Venis, the Rock, and others, while either barely mentioning or glossing over the vast majority of the workers and characters who made the time what it was. Weirdly enough, the Rock is hardly mentioned at all until almost 45 minutes into the documentary. He’s in clips, but everyone else is talked about directly except for him until then. It was weird, but not really anything terribly upsetting. 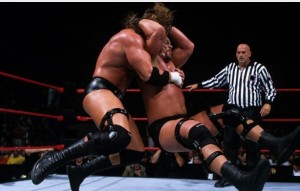 The Attitude Era itself came about as a direct response to the challenge Vince and company were feeling from WCW’s incredible success at the time, as well as the incorporation of the more hardcore and “extreme” elements of ECW. If you watch this doc, you’d think it was all sprung from Vince’s head, like Athena from Zeus. I don’t expect anything less from the man himself, and I suppose I shouldn’t have expected an in depth exposÃ© of the company, but still… it seems too slight. I wanted more.

But don’t let it be said it’s not an incredible package. The matches themselves take up the rest of the discs, and it’s a nice cross-section of the big events from the time. Starting with the Mike Tyson/D-X/Stone Cold confrontations, and continuing through such storylines as the Corporate Ministry, the debut of Y2J Chris Jericho, Austin vs the Rock, the Rock-N-Sock Connection, and all the bigger gimmicks of the time, it’s a lot of fun to watch and think about the first time I ever saw the Rock, or Stone Cold Steve Austin, or the Brood. I came back to wrestling in this time, after having stopped watching when Diesel was still champion. The ridiculousness sucked me in, and I’ve been watching since, to varying levels of attention.

As a total package (not Lex Luger), the set is worth your money, especially if you’re a wrestling fan who watched the era as it happened. While the doc itself may not live up to the lofty expectations I placed upon it, it’s still worth a watch. The Attitude Era took the WWF/E, and the wrestling industry as a whole, to another level, and set it on the course it’s still on today. And the WWE have crafted an excellent tribute to it.