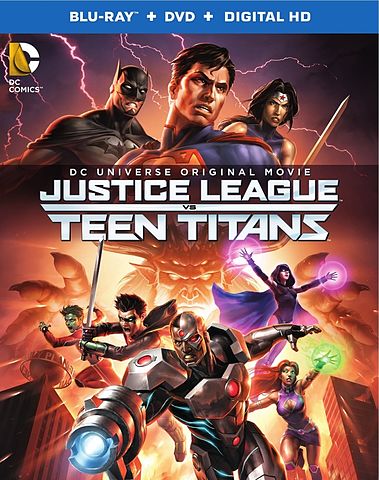 Warner Bros. Animation debuted its newest DC Comics creation in front of an eager WonderCon audience Saturday afternoon. Continuing the thread started in “Son of Batman”, we yet again follow everyone’s favorite Bat-brat, Damian Wayne. A reckless move during a mission with the Justice League leaves Papa Wayne none too pleased and Damian earns himself a ticket to Titans Tower to learn some better teamwork skills. As Damian’s brash attitude clashes with his new teammates, a 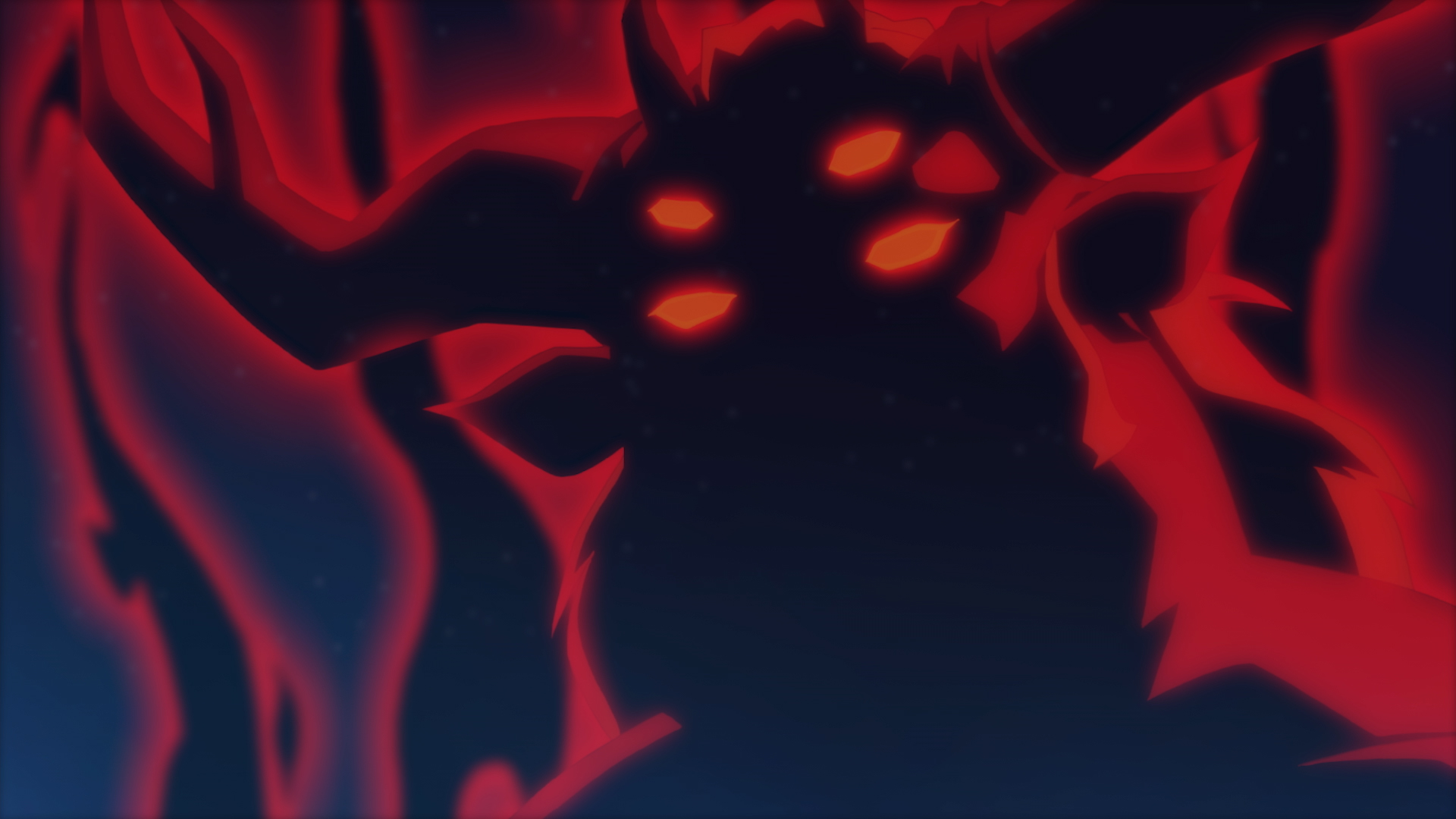 powerful being known as Trigon threatens the planet.

If that blurb may not sound like enough to fill the 78 minute runtime you may be right. Thankfully, the creative team saw fit to offer plenty of dust ups, throwdowns, beatdowns, scuffles, and fights. Opening with the Justice League taking down the Legion of Doom (in front of the Hall of Justice no less), the film makes sure to never go very long without a punch getting thrown. However, for a film with a high fight ratio, it doesn’t feel very violent. A look at the rating information will reveal that you’re in for “fantasy action violence” vs the “intense violence” of “Batman vs Robin” (sure are a lot of “vs” these days). But what it lacks in blood, it more than makes up for in sheer volume: Damian Wayne vs Blue Beetle (which reminded me a lot of Damian and Dick’s trash-talking sparring match in “Batman vs Robin”), Superman vs Atomic Knight, Wonder Woman vs Starfire, and too many more to mention. The title is definitely not a tease – it’s a full on Varsity vs JV rumble at times. 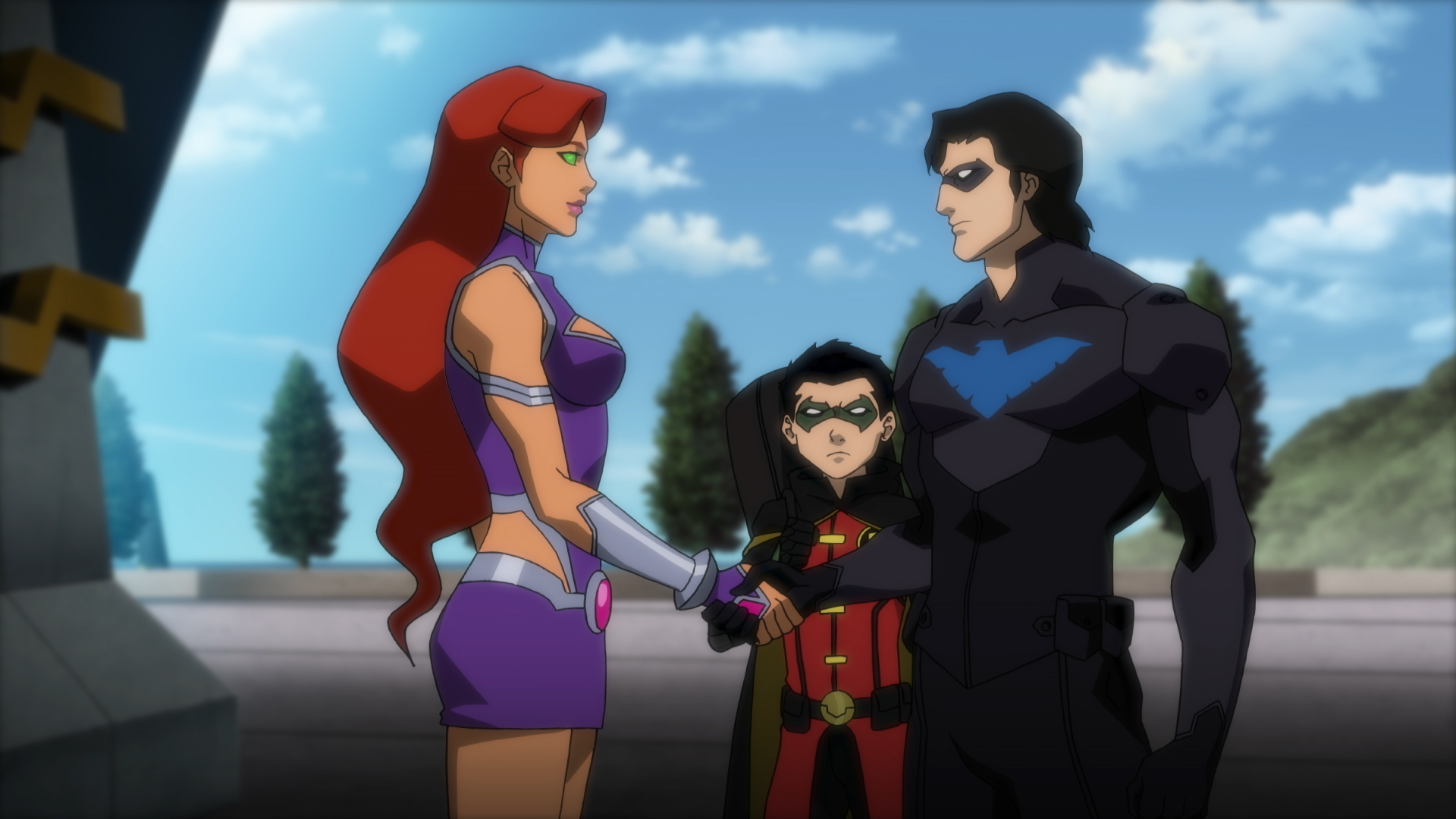 That choice to dial back the brutality really works for the tone of this adventure though. Despite the straight-up satanic villain and Freudian daddy issues we still have lighthearted scenes of Damian and Beast Boy playing DDR, sexual tension between Nightwing and Starfire, and assorted laugh-out-loud one-liners (Brandon Soo Hoo is fantastic as Beast Boy, stealing nearly every scene he’s in). The film also fleshes out more of this new DCU, with Superman and Wonder Woman’s growing romantic relationship, Damian’s ongoing character arc, and the introduction of Raven and the rest of the Titans. Of particular note is the budding friendship (maybe more?) between Raven and Damian. Their dark personalities are a natural match and it’s kind of cute to see ultra-sourpuss Damian be an awkward pubescent boy. At the Q&A panel, one of the creative team members proclaimed “I’m expecting a lot of fan fiction about Raven & Damian!” before reminding the crowd to keep it clean. So if you see an explosion in raunchy Damian/Raven (Ramien? Daven?) fanart in the near future, you’ll know exactly where to lay blame.

While I enjoyed myself, I couldn’t shake the similarities between this entry and other works. Trigon needing a particular female character to fulfill his goals recalls Darkseid’s similar designs for Supergirl in “Superman/Batman: Apocalypse”. Throw in evil mind control/possession and “good guy vs good guy” tropes that have been done to death in films like “The Avengers” and.. um “Avengers: Age of Ultron”, and JLvsTT can feel very familiar. It also doesn’t help that this is our fourth film with Damian. I feel like the auditorium-shaking cheers for Dick Grayson continue to go ignored so I’m going to say the thing we’ve all thinking: our poor Dick needs more attention. Can this guy get a stand alone feature or what?

The Q&A panel revealed plans for another Titans film in the future. If the explosive reaction to the mid credits stinger (with a cameo from a certain TT character) is anything to go on, a Titans film may not be the worst idea for the WB. Furthermore, Sam Liu’s solid direction gives me more hope for his next project: the long awaited “The Killing Joke” adaptation.

Review 5 out of 7 –  A royal rumble of super proportions. A fun (if formulaic) ride with more than a few laughs. Worth the watch for Teen Titans fans.