I want to start out by saying my last experience watching a DCU flick at a convention (“Under The Red Hood” at SDCC 2010) left me a bit underwhelmed. I have mostly ignored the recent explosion of Warner Home Video releases (“Assault on Arkham”, “Son of Batman”, etc), settling for old episodes of Justice League Unlimited and griping about the good old days of “Mask of the Phantasm”. Welp my old man gripes got a sharp answer last night in a packed auditorium at the Anaheim Convention Center with an early screening of the newest Bat-outing (I will using be “Bat-” a lot – you have been warned).

The opening perfectly sets the tone for the feature – Damien Wayne (aka the current Robin and Bruce Wayne’s son) has stolen the Batmobile to investigate a recent spate of kidnappings, leading him to an abandoned toy factory. We’re immediately primed for the creepy atmosphere that surrounds the story (and the Court of Owls stuff does get sufficiently spooky) as well as the tension between father and son. Strip away the secret societies and ass kicking battles (more on those in a bit) and at its core “Batman vs. Robin” is (to paraphrase scriptwriter J.M. DeMatteis) the story of a man “ill equipped” to be a father trying to create a connection with a son who is equally (if not more so) unfit. #SingleFatherProblems amirite? I didn’t know how to feel about Damien at first but having a Bat-son adds new dimensions to the 75 year old Dark Knight mythos. How does he handle fatherhood? What is it like to have Batman be your dad? What happens when an outside force tries to test those bonds?

So about that ass-kicking – I haven’t been this blown away by Bat-animation since “Gotham Knight”. The fight scenes are fluid and truly show off the Bat-ninja style that was sorely missing from the Nolan trilogy. They really spent some money on this one and it shows. The violence is passed around freely on all sides, too – is there such a thing as a “hard” PG-13? But more than just blood, there was a maturity and (dare I say?) anime influence I felt and really enjoyed.

As for the cast, I liked Jason O’Mara’s stern characterization of the Caped Crusader as well as Kevin Conroy’s cameo as Thomas Wayne. Stuart Allan’s Damien rides that thin line between brash and brat well, giving an intensity to his performance (it’s easy to forget Robin is only supposed to be 10 years old). Firefly’s Sean Maher was fantastic as Nightwing, whose appearance alone made the crowd erupt into applause (where’s that Dick Grayson standalone, hmm, DC?). However, I was most impressed by Jeremy Sisto’s gravelly-voiced turn as Talon. Not new to the DCU, the sinister power in his voice makes me want to re-watch his portrayal as Batman in “Justice League: The New Frontier”.

While I did hear some grumbles in the crowd regarding the streamlining of the Court of Owls arc, the creative team admitted to cherry picking the best parts of the storyline for the film. As a single entity, I felt the film worked well. We get our action, our character arcs, and even some surprisingly funny banter. As someone who has grown cynical of the constant Bat-hype in recent years this flick has reignited my love for the character. As soon as WonderCon is over I’m going to binge on the slate of animated films I’ve missed.

Catch it in stores on April 14th! 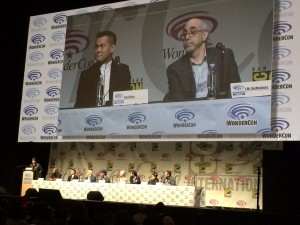 Some highlights from the panel: 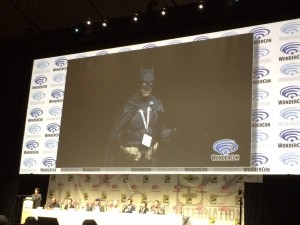 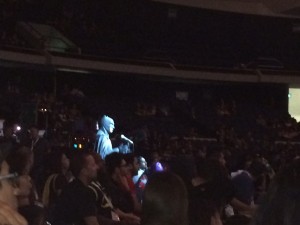 Review 6 out of 7 – Action packed (with a capital A), plot twists, and a father & son learning to connect.. who just so happen to be Batman & Robin. Oh and the sparring match between Damien and Dick is worth the price of admission alone. Don’t call Dick a “circus clown”.