Holy crap, nerds! The 5 Star TrekÂ captains will all be in attendance at the con! That’s right: Kate Mulgrew (Janeway), Avery Brooks (Sisko), Scott Bakula (Archer), William Tiberius Shatner (Kirk, dammit!), and Patrick Effing Stewart (you damn well know) will all be there, appearing together for the first time. Which, let’s be honest, is cool as all get out.

I’m going to put a little story here: I was attending WWPhilly a couple years ago, working a promo booth for my job. Patrick Stweart was in attendance that year as well (though the other Captains were not). It was the year of the World Cup, and England had just tied the United States, pretty much dooming their chances of doing anything. My friend saw Mr. Stewart walking the con floor in an England national team jersey, and yelled at him “Hey Picard, England got booted in the arse!” He just gave a wave and a smile, because he is a classy gent.

But seriously, this is a pretty cool event, and yet another reason to hit the con up. Stewart will only be there on Saturday, but the rest will be there all 4 days I believe.

EDIT:Â Due to overwhelming demand, Patrick Stewart will now be appearing at Philadelphia Comic Con on Sunday, June 3rd from 10am-2pm. 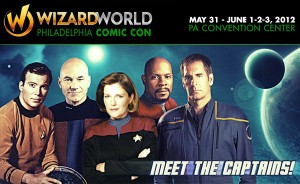 PHILADELPHIA, May 19, 2012 — Patrick Stewart,Â known to millions of fans as “Captain Jean-Luc Picard” on the television series “Star Trek: The Next Generation,” and “Professor Charles Xavier” in the X-Men film series, will attend Wizard World Philadelphia Comic Con, Stewart and Wizard World, Inc. announced today.Â  He joinsWilliam ShatnerÂ (“Captain Kirk”),Â Avery BrooksÂ (“Captain Sisko”),Â Kate MulgrewÂ (“Captain Janeway”) andScott BakulaÂ (“Captain Archer”) as captains of their respective series in the iconic franchise who will be special guests at the event, set for Thursday, May 31, through Sunday, June 3 at the Pennsylvania Convention Center.Â  Stewart will appear at the event on Saturday.

The Emmy-nominated actor, who has performed in more than 100 television and film roles, is one of several actors to appear in all three “X-Men” films: X-Men (2000), X2 (2003) and X-Men: The Last Stand (2006). His role as Picard, which started on “Next Generation,” placed him in four Star Trek films: Generations (1994), First Contact (1996), Insurrection (1998) and Nemesis (2002). He also served as the voice of numerous animated characters in movies like Chicken Little and Jimmy Neutron: Boy Genius, as well as popular TV shows such as “Family Guy” and “American Dad.”

“Bringing together the five Captains from the iconic ‘Star Trek’ series, capped with the addition of the legendary Sir Patrick Stewart, is a once-in-a-lifetime opportunity for our fans,” said John Macaluso, Wizard World CEO.Â  “They and other standout guests like Chris Hemsworth, William Shatner and Stan Lee make Wizard World Philadelphia Comic Con a can’t-miss event.”

VIP tickets are available now for fans who want to secure their opportunity to meet many of the stars at the event, including the five captains as a group.Â  Fans can also visit http://www.wizardworld.com/philadelphia.html for links to VIP packages for Hemsworth, Lee, Ryan,Â WWEÂ® Superstar CM Punkâ„¢, Bruce Campbell, Hayden Panettiere, Paul Wesley, James MarstersÂ and group experiences with Boondock Saints, “Buffy: The Vampire Slayer,” and “Spartacus/Legend of the Seeker” actors.

The full event schedule can be found at www.wizardworldcomiccon.com.