Hey there, hi there, ho there, it is your intrepid reporter Nicholas, here again with your update on the Wizard World Philadelphia Comic Con! 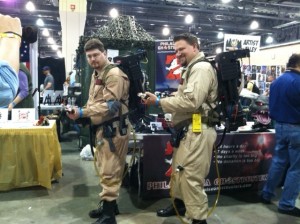 Saturday, as expected, was the busiest day of the con by far. Almost all of the celebrity guests scheduled were there for Saturday, and the costume contest for adults attracted many more cosplayers than the previous 2 days. The aisles, which were previously quite easy to navigate, even with the crowds of the earlier days, became very clogged in places, especially around the autograph areas. And WOE BE TO YOU if you tried to get by the huge lines for the 5 Star Trek captains; their lines were enormous, especially for Shatner and Stewart (of course.)

Speaking of celebrities, about halfway through the day, the sound of a mic drop and Living Colour’s “Cult of Personality” blared over the sound system, signaling the arrival of the WWE Champion, CM Punk. A roar went up from the crowd, of which there was an ENORMOUS line, winding halfway the length of the hall, just to meet the wrestler. I unsuccessfully tried to get people in line to start a “DAN-IEL BRY-AN!” chant. So it goes, I suppose. No “Yes! Yes! Yes!” then, but later… well, we’ll get to that. 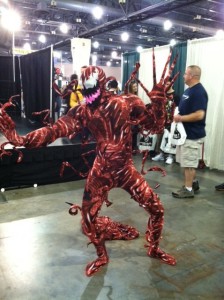 As for cosplayers, there was the usual amount of Batsman, Spiders-Man, and Supermen, but the most popular costumes that I could see were Black Widow, Poison Ivy, and Doctor Who, of which there were MANY of each. There were also some very random and interesting ones as well, including Sterling Archer & Pam from Archer, a VERY good Carnage, and a Dalek/Weeping Angel duo which I couldn’t get a good picture of before they were mobbed.

I visited some more artists and vendors as well, interviews with whom will be up at some point this week. For now, suffice to check out CJ Draden, Loaded Barrel Studios, Heretic City, and the Philadelphia Ghostbusters. I spoke briefly (though not in an official interview capacity) with some of the folks behind the RPG Dystopia Rising, which you should definitely check out, and to the guys from Kirby Krackle as well, and was a little bummed out I couldn’t make their performance at the Field House that night. 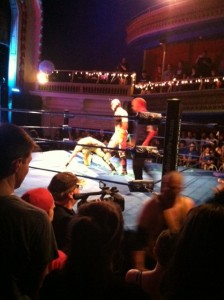 But THAT was because I went from the convention center right to the Troc to see the Chikara Pro iPPV event CHIKARASAURUS REX! I haven’t been to a live wrestling event since I went to a WWF house show in 1993, and had never seen ANY Chikara events at all. Suffice to say, I had a GREAT time. Chikara Pro puts on a great show, full of all the things I love about pro wrestling (ridiculous characters, amazing athleticism, interesting story lines, FUN) with none of the things I hate (“THIS BUSINESS”, misogyny, homophobia, Triple H). There were plenty of “THIS IS AWE-SOME!” and “YES! YES! YES!” chants throughout the night. The highlight was definitely the 10 man tag match which found Eddie Kingston, Jigsaw, and the Colony versus 17, the Shard, and The Swarm. It started out with complete anarchy, and just went crazier and crazier from there, culminating with some amazing spots, like Green Ant jumping off the balcony at the Troc to the floor. Suffice to say, if you have a chance to check out a Chikara Pro event live at any point, DO IT. (The event I saw can be watched online as soon as Monday June 4th, so check at chikarapro.com for all the info.)

So this is the end of my Wizard World recaps, as I am way too run down and exhausted to go today. My final thoughts? It was about what I expected in terms of organization and set up. WW has been doing a con in Philly for quite a few years, so they know what they’re doing. It’s a show mostly focused on celebrity guests and vendors, but the mix of artists and specialty groups was enough that one could always find something interesting to look at and someone cool to talk to. If you’re in the Philadelphia area, I would say definitely check it out next year. 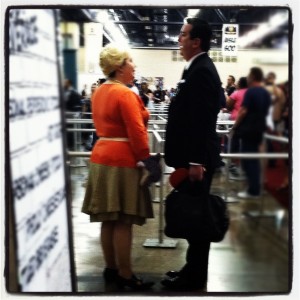 Stay tuned to the site over the next couple weeks, as my more in-depth interviews with the people I talked to at the con will be going up! WOO!