So day two has come and gone here at the Wizard World Philadelphia comic con, and once again your illustrious reporter has some things to tell you of! Let us talk then, children, of strings and ceiling wax, of cabbages and kings.Â Or, barring that, giant blocky Galactus. 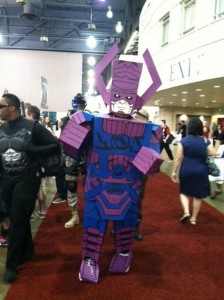 Anyway, the con floor was much more crowded than the night before. All the vendors had arrived, and many more patrons were wandering the aisles, though it was still no unbearable. Whoever designed the show floor did a bang-up job, as despite the mass of people it was never a huge crunch to get anywhere. The costumes were out again, though not as many as you’d expect. Though I’ll bet there’s more Saturday & Sunday, being the costume contest and Kid’s Day respectively.

Celebrities had started to arrive, as cast members from Boondock Saints, Buffy the Vampire Slayer, and other genre shows had fans lining up to get autographs. Though the longest line I saw by far was for Stan “The Man” Lee, who I also saw walking the con floor at one point as well.

I conducted a few interviews, the long forms of which you’ll be seeing later in the week. Included among them was graphic artist Joshua Heckert, webcomics creator Dawn Griffin, members of the PennLUG and Mind’s Eye Society, and Dr. Travis Langley, author of the soon-to-be-released Batman & Psychology: A Dark and Stormy Knight.Â I also attended a panel hosted by Dr. Langley, and featuring Anthony Michael Hall, which was quite a lot of fun. 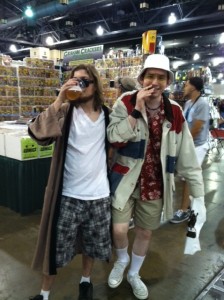 In any event, the con itself is shaping up to be a fun weekend, and Saturday is no exception. I’ll be wandering again, talking to artists and writers and other fun people, and actually will be going to the Chikara Pro iPPV being broadcast live from the Trocadero at night. So that should be a whole lot of fun.