In the coming weeks, I’ll be writing and featuring more content related to the Wizard World Comic Con in Philadelphia, running May 31st to June 3rd. This will ultimately culminate with a number of con-floor reports, some fan and creator interviews, and thoughts on the random panels I’ll be attending there. Some featured guests include William Tiberius Shatner, Chris Hemsworth (Thor!), and WWE Champ CM Punk. So be on the look out for more fun stuff over the next couple weeks.

All that said, this costume contest seems pretty neat. Starting today (Friday 5/18), you can post a picture of yourself in costume to the costume contest tab on the Facebook page, or on twitter by posting the link to @wizardworld with the hashtag #wizardpic. Pretty simple, right? And the prizes include some cool stuff, like tickets to Snow White & the Huntsman, signed celebrity photos, and possibly free VIP entry to the con. There’s also a chance to be entered into the national contest, which could ultimately get you VIP treatment at ANY WW con in 2013.

So what are you waiting for? Get a costume, get a camera, and GET ON WITH THE WINNING!

Here is the official release and contest rules:

Post a picture of yourself in your favorite costume and you could win a VIP package to Wizard World Philadelphia May 31st!

Are you as excited for Wizard World Philly as we are? To help get everyone in the mood, we thought a little costume contest would help. Thing is, Comic Con Philly hasn’t started yet, so…

Starting Friday May 18th post your pics to the contest tab–Wizard World Philly’s Costume Contest page–or through Twitter or, heck, both! We’re going to pick three lucky winners from the top 10 entries (as chosen by you) with the grand prize of a VIP pass to the Philadelphia Comic Con (plus a whack of tickets to Snow White and the Huntsman). Oh and it gets better. The three winners from Philly will be put into a national draw to win a VIP Comic Con experience to the Wizard Comic Con of your choice in 2013! 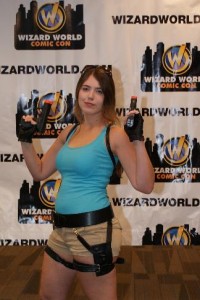 How to enter:
1. On the Wizard World Philadelphia Facebook contest tabÂ . Upload your picture and get your friends to vote for your pic to be in the top five submitted pictures!
2. On Twitter. Upload your picture somewhere online and tweet the location to @wizardworld with the hashtag #wizardpic then get your friends to RT your entry! The top 5 most mentioned/retweeted entries make the cut.
From the top 5 Facebook entries and the top 5 Twitter entries Wizard World will choose three winners from all the entries.

Round-trip airfare for two to any Wizard World Comic Con in North America in 2013 plus 2 VIP tickets and 2 nights hotel.