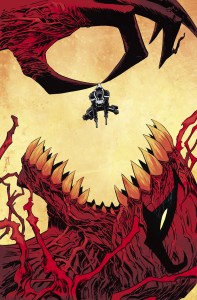 Sometimes I’m at the comic shop, and I like to check-in with comics that I use to read, but dropped for one reason or another. One of those series was Venom, which I really have enjoyed since Flash donned the symbiote, but dropped after the first arc or so because I think was crossing over with Spider-Island or some Spider-man event.

It was a small week for me so I decided to check-in with Venom, and boy has this book dropped for me after reading the last issue.

First, I want to commend Marvel. I think their recap pages don’t get enough respect. While, I’m sure it didn’t tell me everything, it told me enough to not be confused with the issue. Especially being that this issue focuses on two new entities in the Marvel universe, as far as I’m aware anyhow.

Once you get past the recap page though, things start to go south for me. Since I last read Venom, there’s a new symbiote on the market, and it’s name is Toxin. Not only is Toxin new, but it has bonded to the original host of Venom, Eddie Brock, who seems to still have a lot of unresolved anger issues. That’s not an issue, I’m just not a fan of ANOTHER one of the symbiotes in the book. I mean not in this issue, but there’s Venom, Carnage, Anti-Venom, Toxin and others like Scream and Agony. It’s just a bit overkill, and they’ never really been compelling characters to me.

Beyond the original Venom and his grudge with Spider-man and Flash’s turn as a soldier Venom. The rest have just kind of been poor characters, and this doesn’t look to changed that much.

From this issue, the only thing I know for sure is Toxin is seeking Venom.. to “rid” the streets of him, I don’t know.

Then there’s other dude, who I don’t think is named at all in the comic, but I could be wrong. He is being taken over by some alien entity, and also being hunted by both Venom and Toxin, and becomes an unknowing pawn in their little game of cat and mouse.

Other than that, this issue lacks any real noticeable hook. Nothing happens. Flash spends a few pages exchanging banter with Beast via Skype, I guess. There’s a few pages dedicated to Flash attending an alcoholicÂ anonymousÂ meeting, which I think is undone by his constant internal monologing underlying everything he says to these new people he meet.

I found the art mostly enjoyable, but hate the character designs. Toxin looks like a weird mash-up between Carnage and Deadpool (his face for some panels really looks like Deadpool’s mask, could also be the color) and I’m not really sure what to make of the alien dude. He reminds me of a creature you’d probably run into in Dead Space or something, but I guess that kind of makes sense. I also didn’t care for how the artist drew Beast in this book.

Score: 3- Passable: At the end of the day, there isn’t enough here for me to really recommend this comic. I’m sure if you are following along, there’s probably a more interesting story, but for now it just left me sour and disappointed.