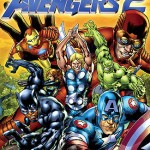 This film picks up a short time after the end of Ultimate Avengers, it is never clearly stated how long after but enough for the consequences and actions of the first film to be felt. Bruce Banner (The Hulk) is in a SHIELD prison awaiting charges, Hank Pym and Wasp are still on the outs and Captain America is still adjusting to his life in the modern world.

The threat remains the same but this time they are attacking the sovereign nation of Wakanda, which brings in the newest member of The Avengers, Black Panther. Much like the first film, this film deals with a lot of personality conflicts with the Avengers and them finally getting their act together to save the world.

The film was released so closely to the original that many of the praise and criticisms of the original remains the same. Actually aside from the Hulk being the final threat, there isn’t a ton to differentiate the quality of the two.

I guess the one major change would be that I felt the plot was spelled out a lot better in this film. The aliens,Â  Chitauri, have a clear goal and a clear target and its up to the Avengers to protect it at all costs.

Review 5 (Out of 7) – It is a good follow-up. It has a more concise plot, but still lacks in several categories. Need to watch with Ultimate Avengers.Â