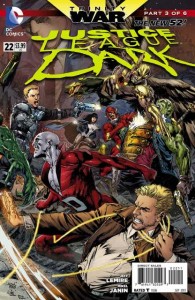 Jeff Lemire and Mikel Janin bring the excitement back to Trinity War! Everything that has been building up begins to unravel. Justice League Dark #22 isn’t particularly about superheroes fighting each other as it is them rallying together to save Superman. This event was teased as a matchup between three Justice League teams, but became a story about how the teams work together to fight an unknown enemy.

Previously, Shazam sparked a political firestorm when he flew to the country of Kahndaq to spread Black Adam’s ashes. Both the Justice League and Justice League of America we’re forced to intervene, leading to Doctor Light’s death at the hands of Superman. After requesting to be locked up, Superman discovers he wasn’t responsible for Doctor Light’s death. Meanwhile, Wonder Woman searches for Pandora who she believes is to blame. Her search leads her to seek help from the Justice League Dark. With the members of all teams finally gathered, they must decide between searching for Pandora, finding Doctor Light’s soul or hunting a super villain that can control minds. Heroes are no longer in shock. Green Arrow, Martian Manhunter, Stargirl and Hawkman disobey orders from Colonel Trevor and Amanda Waller to do what they feel is right. Green Arrow and Stargirl have been uneasy about the direction of the team so it comes as no surprise that they’d be some of the first to leave. Not even Waller’s barking and begging could stop several heroes from leaving ARGUS to help Superman. Some of the other entertaining moments include Zatanna snubbing Constantine’s offer to return to his team and their warnings to Wonder Woman about not trusting him. Naturally, Constantine persuades Shazam to follow him which leads into a separate tie-in issue.

Lemire definitely showed readers that he can entertain with the same ease as Geoff Johns. The story in this issue unravels at a consistent pace. Mysterious continue to expand while questions are answered. The story jumps around a bit, but it never feels confusing. Everything flows organically. Even the Constantine/Shazam exit and ending cliffhanger spins naturally out of the story. If readers weren’t reading this book before, they may start after reading this. 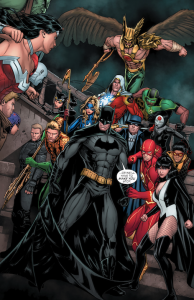 Art by Mikel Janin is certainly the biggest highlight of this issue. He hasn’t been in the industry for very long, but now the world knows how talented he is. While the series has the word “Dark” in its title, it can be a bit deceiving. There have been some dark moments, but thanks to Janin’s art, he makes dark look beautiful. Facial expressions, proportions, backgrounds and staging are phenomenal. The overall look is dark, cinematic, and thrilling. Janin gives some of the best industry veterans a run for their money.

Lemire and Janin are a powerful team and this issue was another strong book for both Justice League Dark and the main event. Trinity War’s mysteries continue to slowly unravel. Three parts into a six part event and the main antagonists have yet to fully reveal themselves. But, this doesn’t feel like a mistake. The writers clearly have something big in store for readers and want them to be as in the dark about it as the superheroes. Enough information is revealed in each issue to satisfy and keep readers hooked. They’ll have to wait until next month for Trinity War to continue in Justice League of America #7. In the meantime, they can pick up both Constantine #5 and The Phantom Stranger #11 to find out where Constantine and Shazam went and what really happened to Doctor Light.