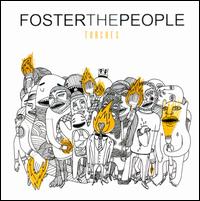 Foster the People are a new band from L.A. and they really deliver with their first full length album titled, Torches! There is something really unique about this band, they are different and very upbeat. I am reminded of Mumford & Sons with how special their first album is. Maybe we are finally seeing a shift in music again with these up and coming bands taking the face of music and turning it inside out. This album really has some very fun different beats to it and musically it sounds like Foster the People have made several albums and like this is nothing new to them. They really love to use synthesizers, different types of programming, and the piano, which is something I feel, is never used enough in today’s music. I normally am not a big fan of the programming and synthesizers just give me raw music, but Foster the People really found a creative way to appeal to me with them. Their first single, “Pumped Up Kicks” is just a summer song to its core. They released this song at the perfect time, and hearing it on the radio I became very interested in what this band was going to come out with. This album is just like their new single, Fun, Summer, Different, and New! While at times I feel lyrically they are all over the place and some of the lyrics make no since to me, such as

-Color on the Walls (Don’t Stop)

Its really just all over the place, but the cool thing about this band they really make it sound so cool you often forget about the lyrics and just sit back and enjoy the beat and sing along with some of these meaningless lyrics.

Now at the same time they will really turn things around and give you some deep and very meaning full life lesson lyrics. These lyrics are very deep.

“You’ve taken your words and you take your judgments
And stick them onto everything
If it don’t conform to what you were born into,
Then you run the other way.”

-Call it what you want

Basically for me these lyrics are talking about people who have these premeditated ideas about people based on their beliefs and if they are not like yours then you want nothing to do with them or will make fun of their ways. This basically is what everyone does all around the world and it really is the wrong way of going about things.

Overall, I really do enjoy this album very much and it is one of those albums that has the potential to become huge, and maybe the “summer album of 2011”. The tracks are really set up well and in a great order, while this is a shorter album, there really are no “filler” songs. I would suggest listening to “Helena Beat” “Pumped Up Kicks” and “Houdini” those three tracks are up beat and a ton of fun to listen to with the windows down driving with the stereo turned up to 11.