Each week we take our favorite comic book of the week and tell you what made us decide on this book. 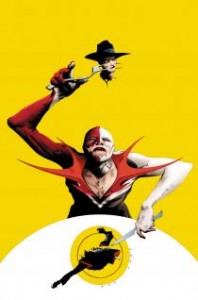 The Phantom Stranger #9 is my pick of the week. It’s been a consistently good and underrated comic. This issue taught the Phantom Stranger what happens when you interfere with people’s fate. His family was kidnapped by a demon and taken deep into Hell. It also showed us that not even the Phantom Stranger is beyond saving. He may have committed the worst sin imaginable but he was willing to sacrifice everything to see his family returned to the safety of their normal lives. J.M. DeMatteis did a wonderful job interpreting Hell in this issue. It opens with a familiar concept we all have about Hell (eternal torture) but takes a different turn in the end. There was a change in artist for the issue which was initially surprising. Thankfully, the style better conveys the horror, pain and sacrifice within the story.
While All New X-Men pleasantly frustrated me, Earth 2 thrilled me and Green Arrow was satisfying, one book stood out above all others. The Phantom Stranger’s journey through Hell and the revelation of what happens to his family is why issue 9 is my pick of the week. If you’re not reading this, you should at least give it a try.
Josh’s Top Shelf Comic

Well, what can I say I went in this week with some excitement about other comic books and Green Arrow decided to be the one to blow me away! This week I was excited about Green Arrow don’t get me wrong. The new team behind this comic has been fantastic so far and this issue doesn’t disappoint. I went into the week pretty excited about Green Lantern and Swamp Thing. Green Lantern was good I liked where the story is headed and how everything is going to work, the art was just disappointing. Swamp Thing was a great set up issue and exciting to read, but Green Arrow had me hooked from the beginning.
This issue really reminded me of the excellent issue of Batman #5 with Batman going crazy from the court of owls and having to turn the comic upside down at one point. We get crazy Oliver, with some amazing art to go along with it. I like where the story is headed and how it calls back to the older issues from the new 52 with the “lame” story. With the success of the show Arrow on CW I am glad this book has turned around the last few issue and feels like it is headed to something great story wise. When you mix a great story with artwork that feels like it mixes will with said story you get a great comic. Green Arrow #21 is my top shelf comic of the week!
Mike’s Top Self Comic 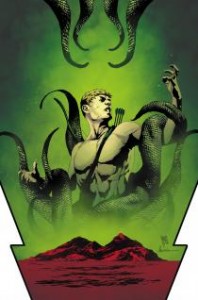 I won’t lie: I’m a little jealous about the issue of Green Arrow this week. Â I have, in a file labeled comics, a pitch/idea for Green Arrow and the League of Assassins that are ‘similar’ to what was teased and explained in this week’s Green Arrow. Â But obviously, this was much better. DC has obviously realized that Green Arrow is their next up & coming property – that with Arrow being a hit on the CW, it’s the hero that desperately needed development by two of their top tier talents-Â LemireÂ andÂ Sorrentino.
After thinking of this issue for a couple of days, a few things stood out to me.
1. It addressed/summarized in a ingenious way, not only the current creative teams’ first arc, but also the the first (often lackluster) issue of Green Arrow in the New 52. This is a great starting point for readers who have heard the buzz about this series, for a reader who started with issue 1 or with issue 16, and for someone who likes Arrow and picked up this issue.
2. It set up aÂ mythosÂ for Green Arrow, which makes sense, adds weight and frankly fills some pretty huge holes on how a spoiled rich boy became such a great archer. Â Family has always been a part of GA, but often due to Ollie’s character failings. Â Here,Â LemireÂ is embracing Ollie’s new youth and making him have to deal with his family’s legacy….which fans of GA from theÂ preÂ New 52 days, might hope re-imagined some classic GA supporting cast members.
3. The end alsoÂ harkensÂ back toÂ preÂ New52 days, but hereÂ LemireÂ embraces a familiar situation with a new perspective due to Ollie’s youth and existing in modern times. Â Another huge breath of fresh air is Ollie’s new perspective much like the newÂ mythos.
In the end, no matter what happens, I feel thatÂ LemireÂ &Â SorrentinoÂ have a great plan thatÂ harkensÂ back to what has been done before, but also takes it in a new direction that really will help propel Green Arrow in a way that hasn’t been done in a while.