Josh’s Top Shelf Comic
This was a huge week comic book wise. I feel like I had a huge stack of books to read! My top shelf is Batman/Superman #1. Larfleeze #1 almost snuck in there! I was a little shocked they released this book with Superman Unchained releasing in the same month as well as Zero Year beginning. I was interested in this but never was really all that excited for it, now I am.

I will admit I am a bit confused by what happened and it will probably require a couple of rereads as well as continuing the story but it was a really fun book. I like how they address the differences between the two characters and where they both are kind of at. This book has some beautiful art and I loved how the panels were split out. That double page with superman on the left and batman on the right was perfect. The art just seems to work with this book.

While I felt that there were a lot of good quality books the more I sat back the more this book kept popping in my head. I will be interested to see where the story goes and how our characters develop. I really hope you guys go buy this book or at least borrow it. Some comedic moments as well as a twist at the end make it my Top Shelf Comic of the Week! 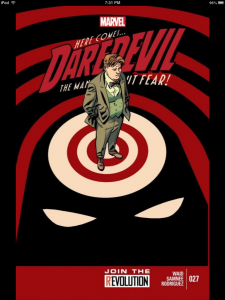 In Daredevil we get the completion of what is really the first two years worth of stories, with a confrontation with the villain behind it all. And this is a villain whom we’ve seen him fight before but never this way. It would have been nice to see the Ikari & Lady Bullseye fight versus Matt last a little longer, but I appreciate Waid & Samnee wrapping up the downfall of Daredevil in Shadowland in such a way that not only sets up with a new status quo for Bullseye and a new villain in Ikari but also continues Matt on the positive and ‘fun’ perspective on life. (and that’s with an ex-wife who is incapacitated and best friend dealing with cancer) Still, this book is a treat month in and month out, and something very different than most comics out there.

In Justice League we have the final chapter Shazam! which in a New 52 DCU that is often critiqued for being to heavy and somber, brings fun and funny back but with a taste of realism. Critics of the New 52 forget that many have always been turned off by DC because of their lack of realism and while many can argue that with the New 52 might have gone too far, the introduction of Shazam via Justice League has been a treat. Johns and Frank have crafter a tale that updates many of the classic Shazam/Captain Marvel lore and also through that updating and realism brings a humor and fun-ness that many have always associated with Shazam comics.

These two books bring to comics something we haven’t seen in a while: Comics being Fun and Funny without being cheesy or childish. And that’s the real line that many have a hard time with – both fans and creators. Some have achieved on a regular basis, others have done it well at time and poorly at others. Daredevil and the Shazam! backup, have done it on most consistent basis than most. Kudos to both writers and both artists who are some of the top of those out there. 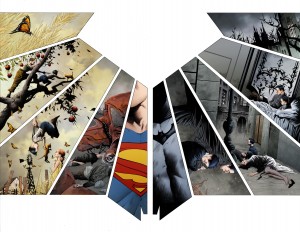 I’m always on the look out for a book outside my usual pulllist that will wow and amaze me. This week, that book was the first issue of Batman/Superman by Greg Pak. While both heroes are spectacular on their own, putting them together makes a team up so perfectly matched that it’s near criminal DC didn’t launch this title at the start of New 52.

There were two major reasons this book was my favorite. First, the artwork by Jae Lee is dark, depressing, and frightening. Lee does a phenomenal job contrasting Superman as a figure of hope against Batman’s symbolism of fear. There’s actually a beautifully drawn two-page spread that shows Superman’s bright history growing up in Smallville vs. Batman’s dark history in Gotham. Both had loving parents that died tragically. Finally, the cover is one of the most gorgeous pieces of art I’ve ever seen. It actually looks like the two are in their classic costumes but further analysis reveals it’s their New 52 look. The book is full of little surprises like this which is why it’s my top shelf pick of the week.