WrestleMania is often referred to as the Showcase of the Immortals. A place where wrestlers go to make their mark. Many have done just that, and created what the WWE refers to as “WrestleMania Moments.” We look to examine 7 images that will always be itched in our brains when the thing of the spectacle!

7) Shawn Michaels/ Ric Flair (WrestleMania 24)- While this isn’t the most technically solid match in WrestleMania history, it is perhaps the one with the most heart. With HBK wanting to be Mr. WrestleMania and put on a show, but still fighting the urge to end his childhood idol career. In the most touching moment of the match, right before nailing Flair with some Sweet Chin Music, Michaels utters “I’m sorry… I love you.” before effectively ending Flair’s career. (We won’t corrupt the moment too much by mentioning he still wrestles!) 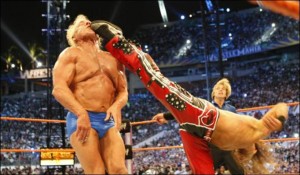 6) Shawn Michaels Entrance (WrestleMania 12)– I almost feel like this is cheating since we included it with our Top 7 entrances, but this is one of those moments that will live with you forever. As noted before, it was the most iconic entrance in WrestleMania history, and one of those defining moments in HBK’s career. 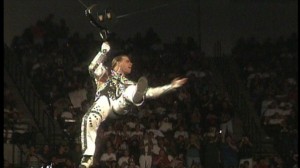 5) The WrestleMania Stare-Down– This would be higher on the list if it wasn’t such a cliche in this day and age. WrestleMania generally showcased the first major encounter between major superstars throughout the years, and this would always lead to an epic stare-down between the two opponents before the match began. Nowadays, these stare downs tend to happen during the build for the match.. or as we saw earlier in the day.. used for photographic purposes. 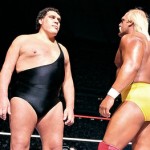 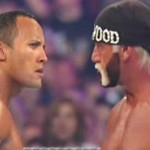 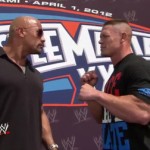 4) Vince McMahon emerging from the ring (WrestleMania 19)– Vince McMahon may be the owner of the WWE, and the greatest wrestler promoter of all-time, but his tenure as a top heel should not be taken lightly. Mr. McMahon is one of the most evil and vengeful characters to ever step foot in the squared-circle. So it is only fitting that at his creation, he gets one of the crowning moments. Emerging from underneath the ring apron, covered in blood with one of the mostÂ sadisticÂ grins ever caught on film, Mr. McMahon looks like the living embodiment of evil. 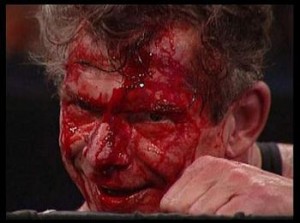 3) Stone Cold in the Sharpshooter (WrestleMania 13)– It is very rarely you can pinpoint the exact moment when someone became a mega-star, but for Stone Cold Steve Austin that moment came at WrestleMania 13. Sure, the Austin 3:16 speech was what got him put on the map, but his face covered in blood screaming in pain.. and never submitting.. is what etched his legacy as the toughest SOB in the WWE. 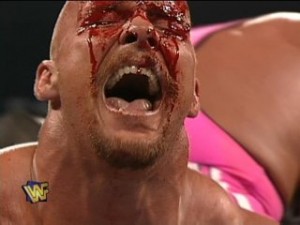 2) Randy Savage and Miss Elizabeth Reunite (WrestleMania 7)- WrestleMania is seen as the culmination of the wrestling year. Big angles come to conclusions, and generally happy endings are written. There is perhaps no greater happy ending than Miss Elizabeth and “Macho Man” Randy Savage reuniting at WrestleMania 7. After the fall-out from WrestleMania 5, it had been 2 years since Savage and Elizabeth had seen eye to eye, and after losing his career to the Ultimate Warrior, Savage was kicked to the curb by Queen Sherri. In a fit of rage, and driven by love, Elizabeth would jump the banner and rescue the man she loved. It was a moment.. that got wrestling fans to cry. A rare feat in any era. 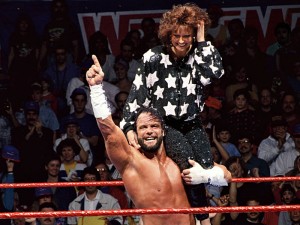 1) Hulk Hogan Bodyslams Andre (WrestleMania 3)– This is the moment that made WrestleMania what it is today. Sure, WrestleMania 1 and 2 were solid shows, but WrestleMania 3 turned it into a larger than life spectacle and Hogan slamming Andre is an image that it embedded in the minds of every wrestling fan. 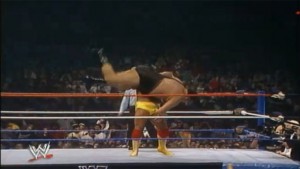