This started off as a list to depict the Top 7 best moments between Superman and Batman, but between their relationship in the comics and various animated properties, there were just too many terrific moments. Instead of cheating their relationship, we have decided to split the list.

The first one, which you’ll be reading shortly, deals with the tremendous chemistry they have shown through various animation projects dating back to Superman The Animated Series all the way through recent DTVs like Justice League Doom.

Let’s get to the countdown

7) Super Date (Batman: The Brave and the Bold) – Who doesn’t love a big team-up story? You know what I love even more? Heroes interacting with each other like normal people. It’s a fairly simple scene, Batman, Superman and Wonder Woman gather for a public dinner to discuss an upcoming event. That’s it. It’s just really charming.. also nice to know they pig out!

6) SuperBatman (Batman: The Brave and the Bold) – There are certain things that shouldn’t work in theory, but they always go back to in comics. One such thing is Batman and Superman mimicking each other in costume. It’s easy for Superman to pretend to be Batman, but the reverse doesn’t work nearly as well since Batman lacks all of the powers. Still, always a fun scene to watch

5) BatStall (Justice League) – Sometimes, all it takes to survive in this world is trusting that your friends will always be there for you. There is an unspoken bond between Batman and Superman that the other will always be around to save the first skin. It was done wonderfully in this scene from “Hereafter”

4) Shooting the Breeze (Justice League Unlimited) – When your job is saving the world, sometimes you don’t have time to sit down and catch up on the events in that special someone’s life. So you steal moments when you can. In this scene from “Clash”, Superman and Batman discuss the latest addition to the Justice League, Captain Marvel, and why Batman has gravitated towards his cheery persona.

3) Bat-Sun (Justice League Doom) – One thing that I love about the Superman/Batman relationship is they are never afraid to shut the other one down when they think crossing the line or doing something stupid. Justice League Doom features my favorite moment of that where they are trying to come up with a solution for the movie’s major plot.. and Batman quickly shuts down Superman’s suggestion. Sadly, I couldn’t find a video of this on Youtube so for now, here’s a screen cap. 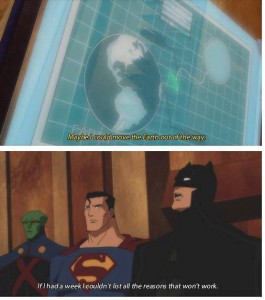 2) Super Meet and Greet (Superman: The Animated Series) – Superman and Batman shouldn’t meet for the first time and become best friends. On paper, their personalities and procedures are vastly different and would conflict. At the same time, they shouldn’t be completely at odds with each others. It’s why the first meet between the two iconic heroes in the “World’s Finest” movie works so well. It gets to the core of their relationship and how they would eventually play off of each other.

1) The Magpie Scene (Superman/Batman Public Enemies) – I will be the first to admit, this is a silly scene, and for the life of me I’ve never really gotten why I’ve gravitated to it so much, but it works. In less than a minute, you get the core ideals that make Batman and Superman work so well. They keep each other grounded and bring balance to their counter parts life. Superman is an idealistic who believes in the best of people, Batman is a realist who has seen the worst of mankind, but that doesn’t mean it’s a point they fight over. It’s what makes them different, but relatability.