“If it’s Halloween, it must be SAW”

Whether you’re a newcomer looking to see what all the fuss was about years ago, or a former fan eagerly (or skeptically, like myself) awaiting the series’ rebirth, you likely could use a reminder of what made the franchise feel unique. The majority of on-screen deaths in the Saw series revolved around elaborate traps created by the villainous Jigsaw killer. There are a lot of traps, but we’ll narrow them down to the top seven:

7. “Reverse Bear Trap” (Saw, 2004) – It’s difficult to argue that the most iconic image from the Saw series is that of a woman, Amanda, with what appears to be a closed bear trap strapped to her face. In a flashback scene, Amanda awakens in a room with the device already attached. A pre-recorded message tells her that, unless she digs the device’s key out of the stomach of a dead man in the same room, the trap will open, ripping her jaw apart. Amanda chooses to save her own life and survives the trap, but it’s not the last time we see the reverse bear trap in the series… 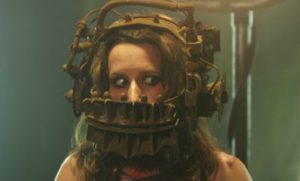 6. Glass Coffin (Saw V, 2008) – Saw V is a generally unpleasant film to watch. Not because of the gore (which is pretty well done), but because of its lazy, derivative nature. Fortunately, its final “trap” is a memorable one. After identifying his fellow detective Hoffman as Jigsaw’s protege, protagonist Detective Strahm infiltrates the killer’s hideout, finding himself in a room with a glass coffin and an audiotape. The tape, recorded by Hoffman, instructs Strahm to go inside the glass coffin where he’ll be safe. Distrusting his adversary’s words, Strahm hides to wait for Hoffman, who enters the room shortly after. The two men fight and Strahm eventually locks Hoffman in the coffin. To Strahm’s horror, the walls of the room begin to close in on him as the coffin lowers into the floor, saving Hoffman from his noble rival’s gruesome, flattening demise. 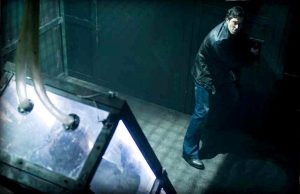 5. Melting Ice Blocks Fake-Out, AKA “The Gallagher” (Saw IV, 2007) – It didn’t take long for the traps in Saw sequels to start losing meaning. Victims often had no chance whatsoever of escaping, and the “melting ice block” that Donnie Wahlberg’s Detective Matthews precariously hangs above, is one such example. Several radiators are positioned around the large block of ice, slowly melting it. Obviously, it seems that Matthews will suffer death by hanging, but in one of the series’ great shocking moments, he falls victim to a hidden trap located above him. When the film’s protagonist, officer Daniel Rigg, enters the room to save Matthews, he accidentally triggers the trap above Matthews, which consists of two giant blocks of ice that swing down on either side of the victim, crushing his head like a watermelon. It’s not a clever trap, but like entry #6, it’s a good fake-out. 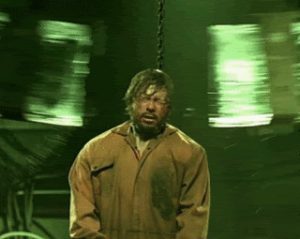 4. Acid Injection (Saw VI, 2009) – The underappreciated Saw VI changed course to provide an entertaining tale with subtext bordering on social commentary. The movie follows a health insurance executive named William Easton, who is forced to endure a series of Jigsaw’s tests in the form of gruesome traps. When Easton reaches the end of the path laid out for him, he finds himself trapped in a room opposite a woman and her son – the family of a man who died after being denied insurance coverage by Easton. Easton’s final test requires forgiveness from the widow and her son, and he receives none. The son flips a switch causing a rack of syringes filled with hydrofluoric acid to crash into Easton’s body, injecting him with the dissolving fluid. The image of Easton’s melted body is perhaps the most gruesome in the entire series.

3. A Pound of Flesh (Saw VI, 2009) – With the “acid injection” trap being the last in Saw VI, it’s only appropriate to bookend it with the movie’s first trap, which sees two callous debtors with devices on their heads, trapped on either side of a room, each with a weighing scale, a knife, and a meat cleaver. The two are told that as penance for preying on others for a living, they must offer their flesh to the scale, and whoever offers the most before a timer expires wins their freedom. Whoever loses will be killed by protruding bolts within the headgear. The two victims frantically slice at their own skin until just before the timer runs out, when one takes the cleaver to her arm, chopping it off and tossing it on the scale to win. The trap is a reference to William Shakespeare’s The Merchant of Venice, and while not the most clever of references, it does a good job of representing the philosophy behind Jigsaw’s machinations. 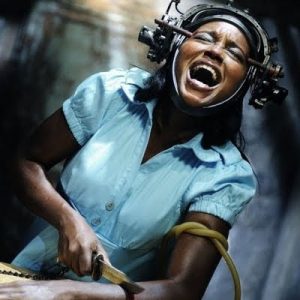 2. Drowning in Swine (Saw III, 2006) – This one is pretty gnarly. Protagonist Jeff Denlon, grieving the death of his son who was killed by a drunk driver, is kidnapped by Jigsaw and presented an opportunity to extract vengeance on the man who killed his son and those involved in the subsequent trial. One of those individuals – the judge who gave the drunk driver a very light sentence – is tied to the bottom of a vat in an abandoned factory when Jeff discovers him. Above the vat is a line of rotting pig carcasses attached to a conveyor mechanism that drops them, one by one, into a giant makeshift blender. The blended pigs start to fill the vat, drowning the man in putrid liquid unless Jeff chooses to incinerate personal items that remind him of his son. Jeff saves the judge, but the damage has been done to the audience, who will likely pass on bacon for several weeks.

1. Razor Box (Saw II, 2005) – One of the least gory traps in the Saw series is also one of the most horrifying. Exposed to deadly nerve gas, the entrapped victims of Saw II are promised a set number of syringes with an antidote scattered throughout their environment. When one victim spots a syringe within a glass box hanging just above her head, she eagerly inserts her arm into one of the two large holes on the bottom side. When she accidentally knocks over the syringe, she inserts her other arm into the box, only to discover that razor blades are positioned around the holes in such a way that they severely cut her arms as she pulls them back. The intense editing adds to the victim’s trauma, and although she dies off-screen, the impact of her ordeal is no less harrowing. 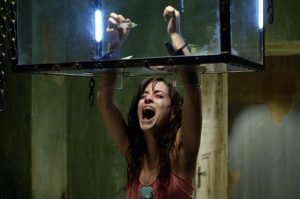 Thoughts? Disagreements? Feel free to share, and check back in after watching Jigsaw and let us know if any of that movie’s traps rival these seven!