Everyone goes to conventions for different reasons. For me, it has always been about the panels. Sure, most of that news could be filtered out in a press release and nowadays most of it is streamed online, but there is still something so magical about being in a room with hundreds and thousands of people going along with the event as you. Below, I present 7 of those magical moments from the panels, I had a chance to attend during NYCC this year.

7. Jess from Jersey – Who doesn’t have a celebrity crush? How many people actually get to tell their celebrity crush they are crushing hard on them at Comic-Con? That’s what happened with Matt Ryan when Jess from Jersey took the mic to ask a question during the Justice League Dark panel. It got even better though as Jess had one of her friends up behind her to request a picture of Matt Ryan after her question. Go Jess!

6. Red or Blue Pill – In the Internet-Age, it’s almost impossible to keep a secret so imagine the reaction of thousands when it was revealed that Laurence Fishburne would be joining the cast of John Wick: Chapter 2. A mini-Matrix reunion in the making!

5. Holy Dirty Humor, Batman! – Adam West is a national treasure and don’t let anyone tell you any differently! It was just an absolute joy to watch him during the Batman Return of the Caped Crusaders panel. He is 88 years young and still as quick-witted and charming as ever.

4. Happy Birthday to You – In one of those magical moments where the stars align, it just happened to be Matt Damon’s birthday, the day he took the stage for his “The Great Wall” panel, and what else are New Yorkers gonna do but sing the man “Happy Birthday.”

3. The Icon – In a year full of great and strange bedfellows, nothing was stranger than the announcement of the Teenage Mutant Ninja Turtles/WWE crossover action figure set. While the crossover had me a bit confused, I was more than pleasantly surprised to have The Icon Sting stop by the panel to help with the announcement! WOOOO!

2. Patience is a Virtue – A lot of things get said at various panels, and these things are reported and debunked just as often. But sometimes people internalizing these discussions, and hold on to it for months at a time. Take the case during the Justice League Dark panel in which a fan remembered James Tucker telling him if he wrote a script for an animated movie he would produce it, a year earlier. Of course, this would said in jest, but a year later the same man returned with a script in-hand. Of course, that couldn’t go anywhere for legal reasons, but it made for a very special moment.

1. Living the Gimmick – In pro wrestling, it is often said that the best characters is yourself turned up. Well if the same is true of other entertainment then Mikey is Greg Cipes or Greg Cipes is Mikey. As part of the Teenage Mutant Ninja Turtles panel on Friday, Cipes revealed to the world an original creation, a song he wrote and sung as Michelangelo to Ice Cream Kitty. I do apologize, I was enjoying the song (which has unfinished storyboards to accompany it) too much to actually record any footage. Though at the same time, I think it’s for the best, I can’t wait to hear the reactions when this debut during the show. 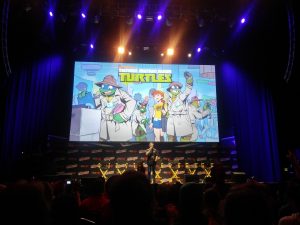