Michael Bay, Michael Bay, Michael Bay, what is there to say about this man. He is perhaps one of the most divisive directors in Hollywood. Yet his films have bought in billions of dollars at the box office. And while he is the King of Summer Blockbusters, he actually doesn’t have a film on deck this year. With his absence sorely missing, we thought it would be best to reflect on his resume and present to you the Top 7 Michael Bay Movies.

To the countdown clock!

7. Bad Boys 2 – Shit’s about to get real! The movie that kind of marks Michael Bay unleashing his final form with at least hundred action sequences that could be any other film’s climax. It may be a bit long in the tooth, but serves up all the one-liners, action and adrenaline you could ask for.

6. The Island –Taking a little disptopian future and adding some Bay to it, Scarlett Johansson and Ewan McGregor run around for many hours in white suits that were totally not the right fashion choice to break out ofclone-organ-harvesty labs with. There are some bikers and Steve Buscemi, so it’s hard to not include this one on the list. There is some amount of consideration of typical sci-fi themes, like souls, what it means to be human, what justifies a right to life, and so forth… but really, this movie is most shocking in the quite few explosions that happen during its course.

5. Armageddon – Big, bold, dumb, but extremely entertaining. The movie has a team of unlikely heroes being jettisoned into space to save the Earth from impending doom. Bay is able to put his unique touch on the events to make for a more lively movie than one would expect.

4. Transformers – The Transformers’ franchise has kind of become a thing that fans and fanboys rage against. But in their defense, the series did start on a high-note. While it may not be the Transformers many grew up with, it was a fun robot-driven (pun-intended) action movie. Shia and Megan were on their best for the first film, and it even managed to be somewhat cohesive!

3. Pain and Gain – This is like the secret Michael Bay film, memory could be foggy on this (even if it was just a year ago), but very little of the marketing or promotion of this film mentioned Bay as the director of this film. In hindsight, it might have helped the film as people went in with different expectations. And as a dark comedy, this film really works. Carried by strong performances from Dwayne “The Rock” Johnson, Mark Wahlberg and Anthony Mackie, this is a recommendation to check out even if you’re a Bay-hater.

2. Bad Boys – Buddy cop films are some of my personal favorite movies. Your Lethal Weapons, your Rush Hours, your and the rest. But Bad Boys was perhaps the first one I saw, and was one of them that stuck with me. Especially if you grew up a fan of Martin Lawrence and Will Smith in the 90s, Bad Boys was a vast departure of Smith’s sarcastic and lovable character on The Fresh Prince of Bel-Air, while Lawrence took a more reserved spot compared to his own tenure on Martin (and really his personal life before and after). The duo has fantastic chemistry and it really carries the film.

1. The Rock – Sometimes the stars just align perfectly. We’re talking a Michael Bay film starring Nicholas Cage that manages to be enjoyable and mostly grounded. The Rock is a pretty remarkable movie, but becomes impressive when you think about how much could have gone wrong. 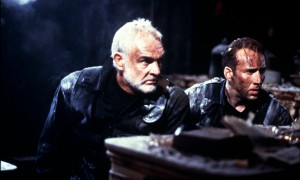